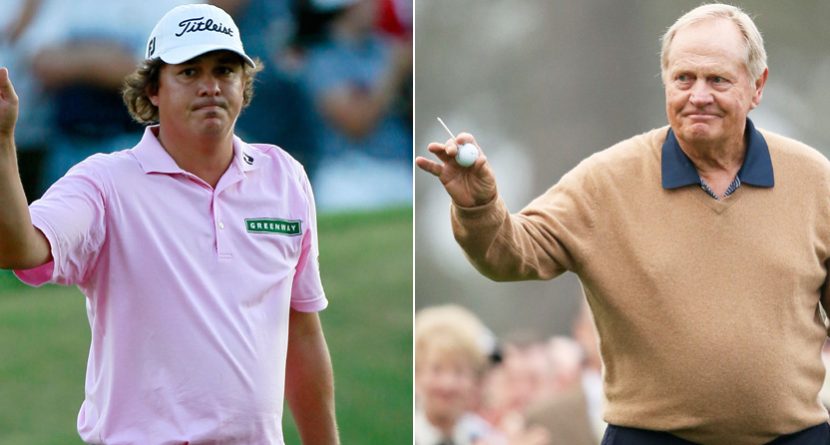 Florida State vs. Auburn. The BCS National Championship Game is set for Monday night, which means 28 days of hype and conjecture are finally over. Perhaps no one is ready for this contest more than two of the world’s most famous golfers: Jack Nicklaus and Jason Dufner.

Nicklaus is a noted Ohio State alum (don’t ask him about that Orange Bowl just yet) but an ardent FSU follower, as his grandson, Nick O’Leary, is a star tight end for the Seminoles. The junior hauled in seven touchdown receptions this year, tied for second in the nation among tight ends.

Then there’s Dufner, a noted Auburn alum who at times appears to be more passionate about his school’s football squad than his profession. Dufner’s given speeches to the team, has an Auburn street named after him, and might be the most dedicated Tiger tweeter around.

Started from the bottom now we here pic.twitter.com/QlGrbdkiWZ

So let’s break down this No. 1 Florida State vs. No. 2 Auburn matchup, as well as the Nicklaus vs. Dufner showdown.

So there you have it: Florida State may have the better record, but Auburn has played tougher teams. And Dufner has more than four times as many Twitter followers, but Nicklaus has 18 times more majors.

We kept our eye on Twitter over the past four weeks to see if Dufner could pull Nicklaus into a little debate. If Dufner got Tiger Woods to respond on the social media platform, there was a sliver of hope that he could do the same with Nicklaus – or whoever it is that tweets for Nicklaus, because we don’t imagine it’s actually Jack tweeting in the third person.

Forty years ago today, Jack won the Walt #Disney World #Golf Classic for his third Disney victory in a row.

But no such luck. Regardless, Jack and Jason will be fired up tonight.