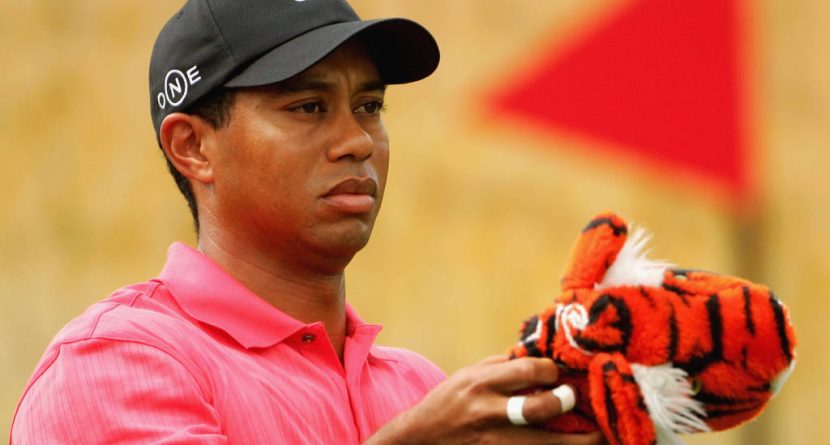 As a golf writer, you soon grow accustomed to that tone of indulgent consideration usually reserved by responsible mortgage-paying adults for the precocious children and elderly relatives in their lives.

It comes to form the basis of your interaction with the suit-wearing world; a place where people have real jobs and the contemplation of Ben Hogan’s ball-striking sits in awkward counterpoint to news of foreign conflict and catastrophe.

“Oh, you’re writing about golf at the moment. How interesting.“

Pitched somewhere between pity and disdain, it’s a register that speaks to the essential frivolity of the your chosen profession, placing it, with just a few careful syllables, marginally above TMZ’s celebrity baby expert on the hierarchy of worthy journalistic vocations.

Sometimes, however, these awkward little exchanges yield a follow-up question or hit upon a point of common interest. Unfailingly, it was Tiger Woods.

“Seriously, though: what’s the deal with that guy?”

Until recently, the challenge at this point in the conversation would become one of preserving your dignity.

How did you explain that, for his decade or so as a professional golfer, Woods ensured that question remained essentially unanswerable; that the closer you looked, the more indistinct he became; that golf’s sole escapee into the wider world, a pop culture icon, remained as inscrutable to the press corps charged with tracking his every movement as to the most disinterested sports viewer?

Cold and statuesque in his technical perfection, and reliably lethal, the then-world No. 1 wasn’t an athlete as much as he was a force – like gravity or magnetism – ordering and shaping all around him.

An enigma wrapped in a mystery wrapped in an impenetrable wall of self-confidence: Tiger wasn’t a great golfer; he was golf.

Paradoxically, his presence came to be so overwhelming that, for those closest to the game (players, media, the kind of fans who compile top-five lists), his dominance simply ceased to be felt. It was instead something to be quietly, imperceptibly adjusted to.

And the more successful Tiger became, the more records he accumulated, the more he, the human behind the inhuman ability, ceased to invite attention.

In that sense, Tiger became easy to take for granted and even easier to grow frustrated with. He swallowed all speculation and curiosity, regurgitating only tepid soundbites and stage-managed equanimity in return.

Even the scandal that ensued in 2010, fueled by collective disbelief and sought-out vengeance over a decade of blunted media curiosity, evolved an emptiness over time. There simply wasn’t enough of a hero or antihero present on which to hang an epic tale of human frailty.

The all-American matinee hero had become a monster, but this new label felt every bit as inadequate as the former.

It’s only now, well after the tsunami of tabloid coverage raked its way back down the beach leaving a trail of observations and anecdotes in its wake, that Tiger’s character has begun to take on a complexity worthy of his public stature.

He, like us, is adjusting to a new normal, coming to terms with a world no longer quite as responsive to his every whim. Results of late have been varied, but rarely anything less than fascinating.

Take the Ryder Cup for example, where something of the old petulance reared its head during the 36-year-old’s anchor match with Francesco Molinari.

After missing a short putt to spare Davis Love’s U.S. side the humilation of outright defeat, Woods conceded the Italian’s final putt in what appeared a momentary fit of pique.

Subsequent attempts to brand the match a dead rubber – led by Woods himself – met with some success in the local media, but ultimately flew in the face of common sense.

It was, arguably, a gesture of pettiness for which only a 14-time major champion could be forgiven.

With that in mind, let’s turn our attention to the event’s aftermath.

Medinah became the venue for an impromptu European celebration and what remained of the American team shambled about, disconsolate.

From this sorry scene a calm and measured Woods plucked Keegan Bradley, Jason Dufner, Brandt Snedeker and Webb Simpson – rookies one and all – and removed them to a quiet room where he issued an unreserved apology for “not getting the points he needed to to get a U.S. victory.”

As an intervention, it may have both lacked tact and hinted at a form of self-absorption  – he was, after all, sharing the room with four accomplished individuals, three of whom could just as easily have rescued the Ryder Cup that afternoon – but in the context of his earlier indiscretion and a career spent in frosty withdrawal, it looks postively saintly by comparison.

Tiger has yet to relinquish his grasp on the impulses and habits that have shaped his career to date, but they’re increasingly coming into conflict with a more balanced, mature worldview,often in ways that would have been unthinkable only a few short years ago.

So, what’s up with Tiger Woods?

I don’t think anyone’s sure yet, but the answer is beginning to look a lot more interesting.