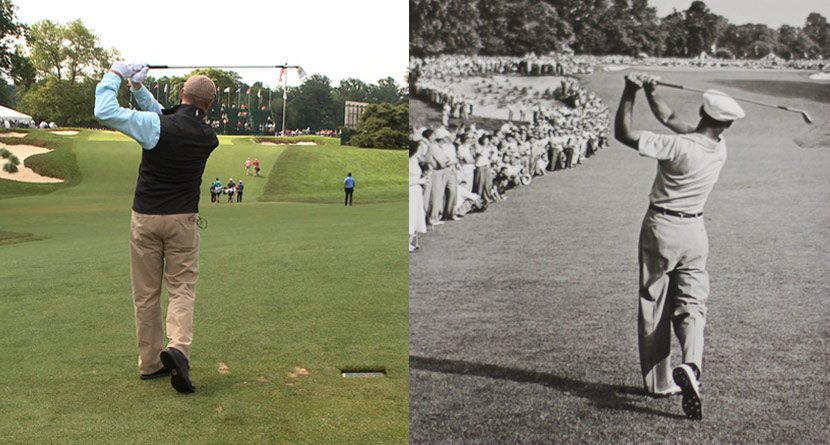 In golf and photography, executing the perfect shot is a near-impossible task.

Maybe that’s why this particular picture is so special.

Sixty-three years ago, Ben Hogan stood in the 18th fairway at Merion Golf Club’s East course, needing to make par at the 72nd hole of the 1950 U.S. Open to shoot 7-over-par 287 and find his way into a playoff with Lloyd Mangrum and George Fazio.

From 213 yards on his 36th hole of the day, Hogan pulled a 1-iron for the most iconic shot of his career. Using what he had learned from years of digging the game’s secrets out of the dirt, Hogan executed. He found the green, 40 feet from the hole, two-putted for par and landed in an 18-hole playoff he won the next day.

By most accounts, Hogan should not have even been in that fairway on that Saturday.

About 16 months earlier, Hogan and his wife were involved in a near-fatal automobile accident. While driving along a highway, a Greyhound bus came into the same lane as the Hogan’s car on a tight highway, looking to pass a truck on a foggy day. Sensing what was to happen, Hogan dove to cover his wife, Valerie. The act saved both their lives, as the steering column of their car surely would have killed Hogan. Instead, he fractured his collarbone, pelvis, ankle and rib, with his golf career proclaimed finished.

The 1950 U.S. Open was Hogan’s first tournament back after the accident, whose effects loomed large. Before each day, Hogan bathed in epsom salts, rubbed his legs with ointment and wrapped them.

The pain became nearly unbearable on Saturday, with Hogan telling his caddie on the 13th hole that he was done. The looper told Hogan he wasn’t working for a quitter and would see him on the next tee. Fellow competitor Dr. Cary Middlecoff helped Hogan literally limp to the finish line, picking up his ball at various points. A lot of hands helped Hogan get to the point where he had the national Open in his own.

That strike with a 1-iron was immortalized in a photograph by Hy Peskin. But the club Hogan used to win the national Open for the second of four times could have easily disappeared forever.

After Hogan had finished playing that final day of regulation, the Hawk instructed his caddie to leave his bag at the bag stand near the clubhouse. An enterprising thief decided to swipe the 1-iron from Hogan’s bag, leaving him without the club for the playoff. The story ended well for the Texan, but the most precious artifact from that Hollywood-esque week went missing for 33 years. Golf-club dealer Bobby Farino bought himself a set of irons for $150 from an old man who showed up to The Players Championship, looking to make some scratch for his bag of nine irons and four woods. As he was inspecting the set, Farino noticed the 1-iron was different from the others in the bag. He wondered if he had stumbled upon Hogan’s 1-iron from Merion. Taking the club to the Ben Hogan company for identification, the man himself told Farino he had found the long-lost iron. The ground-down hosel — which Hogan did himself to prevent shanks because he tended to make contact close to it — was probably the most-obvious clue.

The club was eventually turned over to the USGA, which has dutifully held onto the club ever since.

The 1-iron made its return to Merion this week, with the USGA bringing the club from its headquarters in Far Hills, N.J. Back9Network’s Matt Adams was given special dispensation to recreate Hogan’s immortal shot. Wearing the mandatory white gloves to protect the club and swearing to let no one — and we mean no one — else touch it, Adams returned the 1-iron to the plaque that now commemorates its most famous descending blow and hovered the anachronistic blade over the spot.

The 1-iron is a club whose popularity has dwindled over time. What, with titanium metalwoods and ultra-forgiving hybrids, the longest iron has largely gone the way of the dinosaur.

But for these first few days of the 2013 U.S. Open at Merion, almost every player on the field is champing at the bit to get their hands on a 1-iron.

After all, it’s been said only God and Hogan can hit one of them. Recreating Hogan’s finest moment is the perfect homage in one of the game’s great cathedrals.