Best Moments From Day 1 At The Ryder Cup 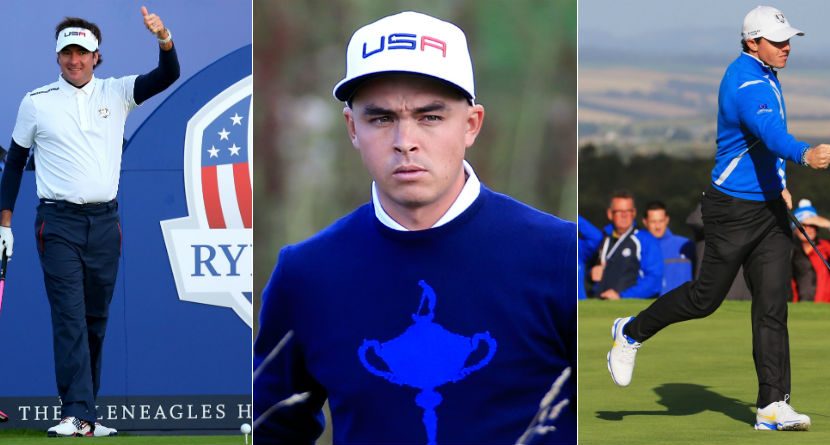 The first day of action is complete at the Ryder Cup and what a day it was. The U.S. took the lead during the morning session before Team Europe stormed back. The hosts will take a 5-3 lead into Saturday morning’s action but until then, we’ll be looking back on the best moments from Friday at the Ryder Cup.

Here are our five favorites:

Bubba Watson didn’t waste any time in getting the crowd fired up at Gleneagles. Before his early-morning tee time in the first match of the entire event, Watson took the clock back to 2012 by inviting the 2,000-plus sitting in the bleachers that wrap around the first tee to cheer through his tee shot.

You’ll remember at the 2012 Ryder Cup at Medinah when Bubba and Ian Poulter engaged in some gamesmanship on that first tee. Here’s hoping for more Happy Gilmore-style tee shots.

How ‘Bout Those Ryder Cup Rookies?

There were a lot of questions surrounding the potential contributions of the U.S. team’s rookies — Jimmy Walker, Jordan Spieth and Patrick Reed. It’s safe to say the trio acclimated itself quite well to the pressures of international competition.

Walker halved both of his matches with partner Rickie Fowler while the youthful duo of Reed and Spieth torched Europe’s most dominant Ryder Cup player Ian Poulter and partner Stephen Gallacher, 5 and 4.

U.S. captain Tom Watson sat the duo in the afternoon session but we may very well see more of Reed and Spieth — officially the youngest partnership in Ryder Cup history — for years to come. Confidence is by no means lacking for them, either.

“Everybody on the team wants Poulter and we were able to have him first.” – @JordanSpieth #RyderCupUSA

Rickie Fowler’s Shot on No. 16

There are so many tactics to consider when hitting a shot in the Ryder Cup. Your shot choice surely depends on the format, your teammate, the conditions, the score, the hole and the lie. In making his decision to go for it on the 16th during the afternoon session Friday, Rickie Fowler hit the shot of the day.

It was bold, it was tough and it was the right play. Our friends at No Laying Up would absolutely agree:

If you’re a fan of the U.S. team, this wasn’t necessarily a moment you’d like to remember but it’s a big one, nonetheless. Two down with two to play and in danger of falling in both matches on Day 1, Rory McIlroy and Sergio Garcia needed a big putt. McIlroy promptly drained a 40-foot bomb to give the Europeans a birdie and a key hole late in the match. The momentum carried over to 18 where the duo made birdie again — ultimately halving the match.

Before the questioning of Phil’s decision to sit himself in the afternoon session begins, let’s look at the positive. The venerable Bradley-Mickelson duo extended its streak of Ryder Cup team victories to four with a big, sloppy, hard-fought victory over Sergio Garcia and Rory McIlroy. Bradley and Mickelson didn’t have their A-games — not by a long shot — but were able to butt-slap and fist-pump their way to a full U.S. point.