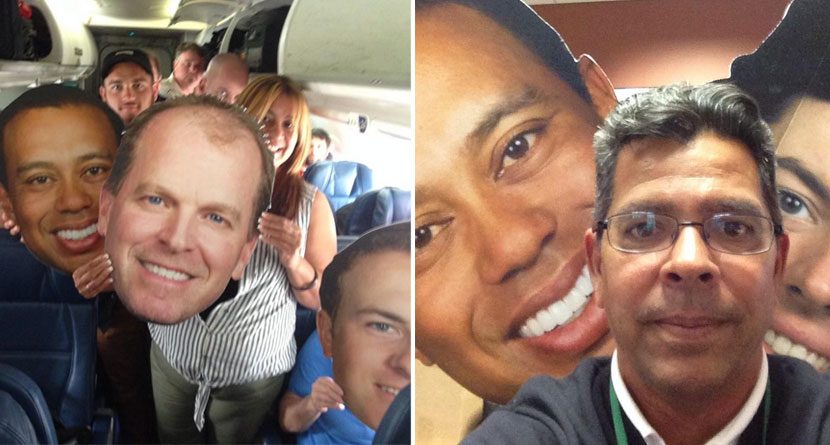 The WGC-Bridgestone Invitational features an elite field, as 49 of the top 50 golfers in the world rankings will tee off at Firestone Country Club this week. With that said, you can expect to see a lot of big heads at the tournament.

But that’s not because the golfers are over-confident or cocky. It’s because there are literally big heads.

I’m not joking. See for yourself:

Come out to the Social Media Hub in the Firestone Village! 1st fan to show they LIKE our page gets a prize! #WGCBI pic.twitter.com/izPk4UmACd

It’s kind of creepy and awesome at the same time, and I love it. How about a few more from Tiger Woods and Rory McIlroy who, well, deserve to have big heads, too.

Hey @McIlroyRory, trying to work here. The guy wins #TheOpen and thinks he can do whatever he wants: http://t.co/W8DIgW7nsS

Not saying Rory’s gotten a big head after his latest win, but I mean, this thing is huge. pic.twitter.com/1YGNpjL5Hq

But Rickie Fowler and McIlroy won the day with their double-selfies:

I seriously hope these cardboard cutouts make it to the course this week. I’d love to see McIlroy reading a putt with a big head of his in the gallery.

These cutouts aren’t unlike the ones held up in college basketball games. Like this one, which is simply … epic:

We’ll be sure to keep you updated in case we spot any more big heads invading the grounds at Firestone CC.

Related: Tiger Woods On His Son: ‘He Wants to Beat Me in Everything’