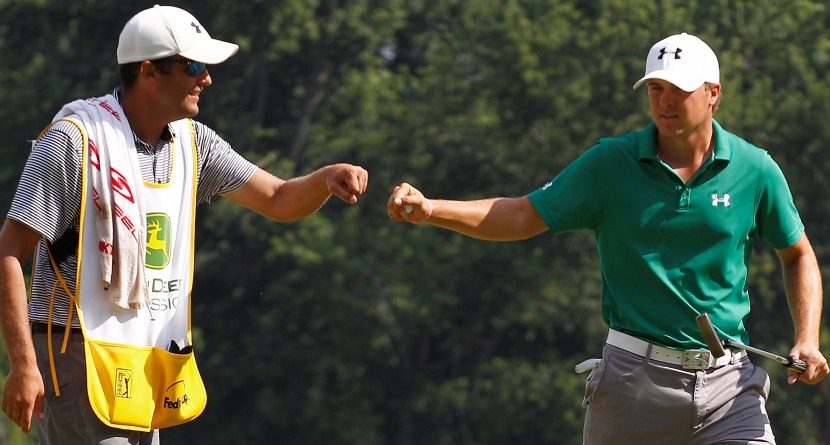 From Silvis to Scotland, Omaha to Sandy, it was a big weekend for big moments in the world of golf. Here’s what you may have missed:

Spieth secures spot at Muirfield
At the ripe old age of 19, Jordan Spieth became the youngest victor on the PGA Tour since 1931 when he held off Zach Johnson and David Hearn on Sunday’s fifth playoff hole at the John Deere Classic in Silvis, Ill. The victory allowed Spieth to hop aboard the charter plane waiting to take players who have qualified for the Open Championship on the trans-Atlantic flight. Had Spieth not won, he’d have been stuck doing… whatever is that millionaire teenage golfers do when they can’t get into a bar. We wanted to note that the $828,000 winner’s check Spieth collected made him a millionaire, but the fine young man was already having such a fine season (five top-10s in 15 events) that he’d already pocketed more than $1.2 million this season, his rookie campaign.

Oh, and he wouldn’t have even been in the playoff were it not for this incredible shot:

Mickelson tried but failed to give Scottish Open away
Phil Mickelson has always been up and down, and his downs have always seemed to be more memorable than his ups. He was on the verge of another low point Sunday when he three-putted the final hole at the European Tour’s Scottish Open. Two putts would have given Mickelson his first win in Europe in 20 years. Instead, he fell into a playoff with South African Branden Grace. The American quickly rebounded, though, landing a 45-yard pitch to one foot of the pin on the first playoff hole. His easy birdie putt sent him to Muirfield a much happier man.

Perry’s finally a multiple major winner
Kenny Perry has never won a major on the PGA Tour, and at 52, it doesn’t look like one’s in his future. He came close – agonizingly close – twice, at the 1996 PGA Championship and 2009 Masters. But in his third year of competition on the Champions Tour, Perry now has two majors. His 7-under 63 on Sunday in Omaha gave him the U.S. Senior Open, a title that comes two weeks after his maiden major, the Senior Players Championship.

Wilcox posts a 59
And out in Sandy, Utah, on the Web.com Tour, 27-year-old Will Wilcox closed his weekend with a 59, just the fourth player to score under 60 in a Web.com Tour event. Yet, his 12-under round couldn’t catch Steven Alker or Ashley Hall, who went to a playoff, which Alker won on the first hole. If only Wilcox hadn’t shot that even-par 71 on Saturday.