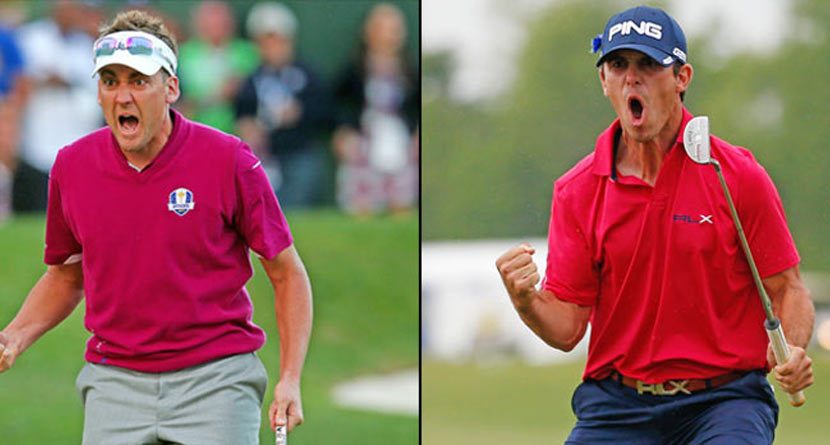 It’s not uncommon in professional sports for the young unknown to want to go toe-to-toe with the best in the game. With bragging rights on the line, David-versus-Goliath-type matchups can make or break careers and create or define an athlete’s legacy.

In an interview with ESPN UK, Horschel discussed the possibility of playing in the Ryder Cup and facing his good friend — and European Ryder Cup hero — Ian Poulter.

“Everyone says they would love to see Poulter and I go up in the singles matches,” Horschel said.

“Poults is a good friend of mine,” Horschel continued. “I love him to death and he’s been a very good guy to me – so it would be fun to see two fiery guys duke it out on Ryder Cup Sunday.”

Horschel, of course, is known as a fiery competitor. When he won the Zurich Classic of New Orleans in 2013, Horschel let out a legendary scream, reminding many of the way Poulter celebrates. Few are more boisterous than Poulter in celebration — except for, perhaps, Horschel. Between Poulter and Sergio Garcia, it’s no secret that the European squad has plenty of passion. But aside from Keegan Bradley (if he gets picked) on the American side, there is no one that is overly exuberant. The addition of Horschel would certainly change that.

“I’m not saying I’m the savior, but if I were to make the team or to get picked, then I could help them out a lot,” Horschel said. “I’m just a guy that loves to play the game with a lot of energy and can bring a bit of fire that I think the team may miss.”

And how amazing could that matchup be? Horschel vs. Poulter in Sunday singles at the Ryder Cup? There would be more yelling than a Sharapova/Williams sister battle at Wimbledon. It could be a match for the ages. Few things are more exciting to watch than golf when you can feel the pressure in your living room or at the bar. It’s perfect. It’s why we love sports, and it’s not only what the Ryder Cup needs, but what it’s meant to be.

Unfortunately for Horschel, he was not one of Tom Watson’s captain’s picks. The next opportunity to see this battle will be when the Ryder Cup returns to American soil at Hazeltine National in 2016.