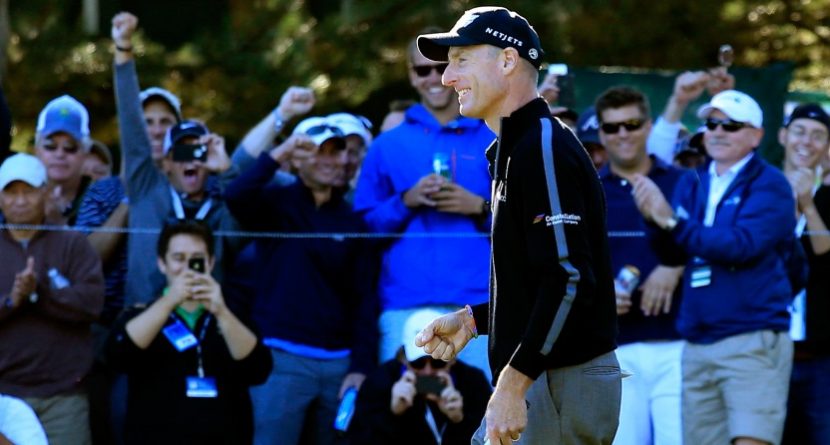 Jim Furyk shot the sixth 59 in PGA Tour history in Friday’s second round of the 2013 BMW Championship. Based on the quiet atmosphere around Conway Farms Golf Club, however, you may have never been the wiser.

While waiting for play to begin, I hung around the small white building that served as the player locker room near the Media Center. Fluff Cowan, Furyk’s faithful caddie, shuffled past a golf cart to find shade from the slowly rising morning sun. He placed a cigarette in his mouth, made eye contact with me and muttered a cordial “Good morning”, which I returned.

Perhaps he knew something the rest of us didn’t?

Don’t get me wrong about the course’s quietness; there were definitely murmurs around the course of Fuyrk’s play throughout the day. The massive scoreboards scattered around the course’s 7,100 yards provided “breaking news” alerts whenever a player did something of note. When Billy Horschel holed-out for eagle on hole No. 16, the news found its way on LED screens within seconds.

The same could be said for Jim Furyk’s eagle on 15, his sixth hole of the day. Suddenly, Furyk was 6-under on his round and very much in tournament contention.

After Furyk made the turn at an astounding 8-under 28, the phrase of “59 watch” began circling through the gallery as a whisper.

Talking about a golfer’s potential to shoot sub-60 on the PGA Tour isn’t exactly the same as mentioning a pitcher’s no-hitter bid in the 7th inning. There is no superstition stigma. People won’t give you a dirty look for uttering the number in public. In fact, no-hitters happen more often than a golfer going that low in a round. It’s the unicorn everyone knows exists and will not think twice about discussing it.

While positioned on the 14th hole Friday afternoon, a young father looked down at his 8-year old son. “Jim Furyk is going to shoot 59 today, son.”

After a par on Conway Farms’ first hole – Furyk’s tenth of the day – the sudden main attraction made three consecutive birdies to reach 11-under for his round. Scoreboards kept us updated. Gallery members provided the commentary.

“Luke Donald owns the course record you know,” a man with knowledge of Donald’s membership at the course surmised. “Furyk is gonna take that away today.” I doubt Donald will mind.

A bogey on hole No. 5 caused a stir throughout the crowd as doubt crept into our minds like the clouds that cooled the Chicagoland air. Suddenly, memories of Furyk’s infamous disappointments bloomed around me.

“He’s gonna mess this up just like he did at Medinah,” a middle-aged man quirked to his friend in a nasally Chicago accent. “He just can’t get it done. Watch.”

Following a par on hole No. 6 – which is no small feat on the 217-yard par-3 – Furyk made his tenth birdie of the day on the short par-4 seventh hole. Fans began trampling through the heather grass speckled around the grounds, hoping to find the best vantage point to witness history.

A disappointing par on hole No. 8 delayed gratification for everyone and increased the pressure for Furyk, who headed to his final hole of the day. Could he manage one more birdie? It almost seemed too much to ask.

When his approach into his final green landed within 4-feet of the hole, the crowd that was so somber hours before erupted into a jubilant exclamation that resonated in the ears of everyone watching.

A single voice rang out from the gallery. “I’ll give that one to ya, Jimmy!” Relived laughter followed, punctuated by a Furyk smile and acknowledging wave. Of course, Furyk made that pressure putt with poise and determination. Fans responded appropriately.

While walking off the ninth green after guiding his boss to history, Fluff Cowan seemed as calm as ever. I moved to the walkway leading to the scorer’s tent from the ninth green. Fluff looked up just as I hung over the ropes separating the gallery from the course.

We once again made eye contact. Fluff smiled. It was a job well done.

Related Links: A Look at Some of Golf’s Greatest Records