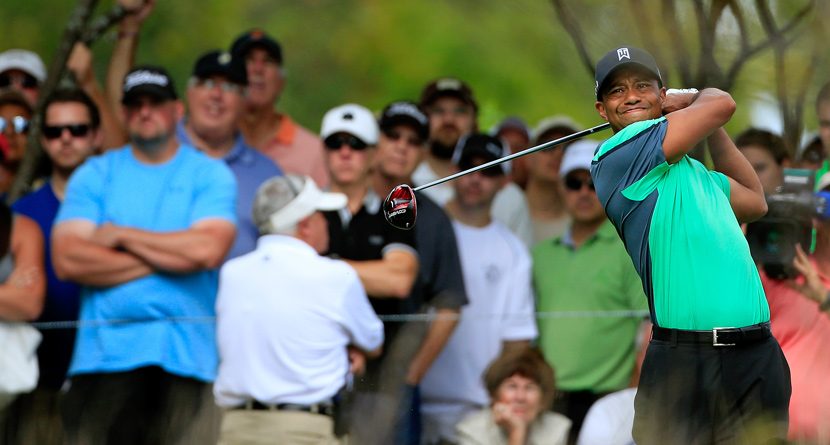 Thursday morning at the first round of the 2013 BMW Championship started peaceful. After arriving at the media center around 7:30 a.m., I grabbed a coffee and a quick bite to eat before heading out to the driving range to get my bearings with Conway Farms in Lake Forest, Ill. The temperature was a mild 70 degrees, but having lived in Chicago my entire life, I knew the dog days of summer would have more in store.

My plan for the day was to follow Tiger Woods, who would tee off on No. 10 at 10:51 am. His playing partners for the day – Henrik Stenson and Adam Scott – were already on the putting green. Tiger was just walking out of his courtesy BMW vehicle. After finding a prime position on the tee box at No. 10, I waited roughly an hour before the first group of the day – Graeme McDowell, Brian Gay and Patrick Reed – teed off. My fellow gallery members were already buzzing with anticipation of Tiger.

“Tiger hasn’t been playing as well as he should be,” one overheard voice mentioned. “That girl of his ain’t no good.” (Armchair relationship experts were abundant in Lake Forest.)

Tiger’s arrival to the tee was met with the usual fare. Shouts of “Go get’em, Tiger!” rang out through the breezy morning air. While scanning the BMW owner’s tent above the tee box, I noticed NBA legend Scottie Pippen smiling down on all of us. Everything just turned Hollywood.

Matching Tiger’s pace is more difficult than you would suspect. In addition to the numerous bystanders walking aimlessly in front of you, Tiger walks quickly down the fairway, eyes focused forward, caddie jogging slightly behind him. I was already winded by the time I reached the first green, which Tiger birdied.

A slightly intoxicated 20-something exclaimed, “Uh oh, tournament’s over!” It was 11:15 in the morning. I suppose it was noon somewhere.

Tiger’s next shot at the par-3 No. 11 hole flew the green, prompting a chorus of moans and hisses around me. “Nice yardage, douchebag,” someone muttered. “Bubba would have blamed his caddie for that one,” another surmised.

A funny thing happens whenever I watch Tiger Woods at a golf tournament: No matter where I am on the hole, I’m always standing next to the idiot who hates Tiger more than anything. Tiger would save par after a spectacular chip shot to a foot.

By the time we had reached the 14th hole – Tiger’s fourth of the day – I noticed a large man towering over me just to my right. Pippen had made his way into the gallery, walking with who I assume was his agent. “What’s up, Pip?” I asked nonchalantly and offered a fist-bump greeting, which the six-time champion accepted warmly. We walked the remainder of the hole side-by-side while other fans walked up to Pippen to offer a hello or a handshake. No need for security this day; the majority of people were busy watching Tiger.

Tiger’s second birdie of his round came on the par-3 17th. After making his putt and tossing his putter to his caddie, a young boy exclaimed, “Thatta boy! Come on Old Tiger!” Woods glared in his direction and muttered an abbreviated “Thanks.”

The crowds grew bigger as the day grew later. Standing on the third tee – Tiger’s 12th of the day – the main attraction was 3-under par. Brandt Snedeker had just made seven consecutive birdies, and the news was spreading rapidly. “Seven birdies? That’s how Tiger should be playing,” someone quipped. “What’s he doing letting Snedeker steal the show?” Indeed. How dare Tiger.

By the time we had reached Tiger’s final three holes of the day, finding a clean sight line to his swings became a battle. People constantly bump, shove, and borderline assault one another to get one more centimeter of open space for the three minutes it takes Tiger to hit a shot. With lower backs aching and feet blistering, fans around me began to get cranky and more vocal.

When his final putt dropped on Conway Farms’ ninth hole, the crowd rejoiced for a final round of 66. Long after Tiger walked off the green and into the scorer’s tent, many people stood around with mouths stern and eyes weary.

The more things change, the more they stay the same with golf fans.