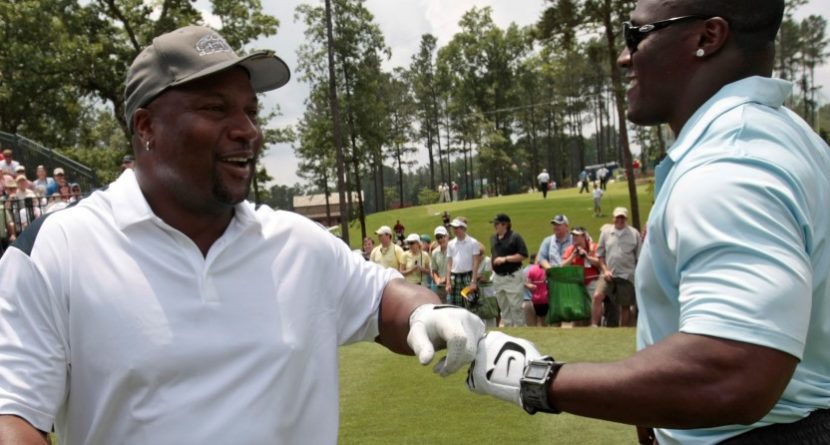 Add this to the reasons why we love Jason Dufner: the inaugural Jason Dufner Foundation Celebrity Golf Classic.

The Duf Daddy will be raising money for charity this coming Sunday and Monday in his hometown of Auburn, Ala., and not surprisingly, a host of University of Auburn alums will be on hand to support. Some PGA Tour buddies and NFL players will help with the festivities at Moore’s Mill Club as well.

The most notable celebrity – other than Dufner, of course – will be Bo Jackson, the Auburn legend who won the 1985 Heisman trophy before becoming the first athlete to be named an all-star in professional baseball and football. Don’t worry, Bo knows golf:

Dufner and Jackson will be among the five celebrities auctioned off to play with the other participants. PGA Tour pro Zach Johnson, Pro Football Hall of Famer Thurman Thomas, and PGA Champions Tour player Jim Thorpe will be the other golfers bid on.

Fellow PGA Tour pro and Auburn alum Will Claxton will also be in the field. These celebrities will be placed in other groups via a blind draw.

Beneficiaries of the golf tournament include Blessings In A Backpack, the Boys & Girls Club of Greater Lee County, and the Auburn University Hunger Solutions Institute. These groups serve the Jason Dufner Charitable Foundation’s mission to provide financial assistance to deserving people, groups, organizations and communities which are suffering as a result of natural disasters, catastrophic events, diseases, illnesses or other unexpected events giving rise to suffering and special needs.

Jason and his wife Amanda firmly believe that the fortunate should assist the less fortunate in times of need and distress, and the Celebrity Golf Classic is certainly a byproduct of that vision.