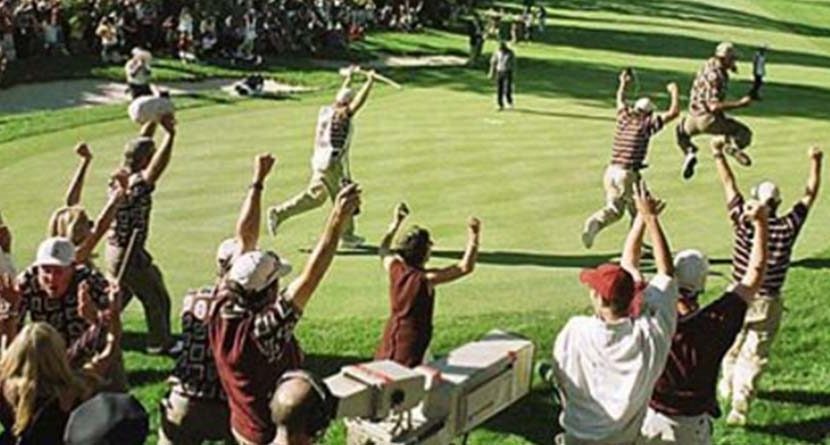 Brandel Chamblee is good at his job.

The 13-year television veteran is far better known for his outspoken, yet typically well-researched opinions than he is for his 17 years spent on the professional golf circuit. Now spending most of his time in front of a camera, his muse for much of his TV career has been Tiger Woods.

Chamblee has, by his own calculated estimation, done about 5,000 Woods breakdowns over the course of his career. He dissects, analyzes and critiques Woods — again, by his math — at a frequency of more than one per day.

Often critical, Chamblee has made a living and built a reputation as a guy who can speak some hard truths, but back them up with enough facts that even if you tend to disagree with the premise, you can understand where he’s coming from.

At least, until this past week during the Presidents Cup.

On a panel during a ‘Live From the Presidents Cup’ postgame, Chamblee was called upon for comment on a report that Woods had offered his services to be an assistant captain at the 2016 Ryder Cup and what impact it may have on Phil Mickelson as the de facto stepdad of the US Ryder Cup team in the post task force era.

Chamblee then went in on Woods and Mickelson saying the pair were not “deserving” — his word — of holding leadership roles at the Ryder Cup given their lack of passion for the event while in their respective primes.

A slippery slope to begin with, Chamblee went on to completely knock the legs out from beneath his argument concerning Woods by pointing to his record in the biennial event.

“If they had (interest or passion), Tiger Woods would have had a record more commensurate with what he did in match play,” Chamblee said, then citing an inaccurate 90% winning percentage.

Second, Woods 13-17-3 overall Ryder Cup record is a nice stat to throw out to bolster a flawed argument, but when you’re on the GOLF Channel in the middle of the night and in the middle of football season, you have to know you’re talking to the hardest core of hardcore golf fans. You need to come stronger and more prepared than simply trotting out an overall record, especially in a team event where match results aren’t completely within one’s control.

In Woods’ seven Ryder Cup singles matches, he’s gone 4-1-2. His only loss came in his first event in 1997 and one of his halved matches came after the Cup had already been retained by Europe in 2012.

In terms of his Ryder Cup record not being “commensurate” with his match play record, Woods is 50-16-2 in one-on-one match play during his professional career, winning or halving 76% of his matches. In the Ryder Cup, he wins or halves singles matches at an 86% clip.

Maybe he’s not passionate enough outside of the Ryder Cup.

Woods’ remaining 9-16-1 record leaves a lot to be desired, no question about it. But given the volatility of match play, the uncontrollable aspect of playing alternate shot (foursomes, 4-8-1) and the onus to beat not one, but two of the best players in the world in best ball (fourball, 5-8) makes how much somebody “wants it” fly out the window and “commensurately,” allows Chamblee’s argument to fall flat on its face.

Later in the week, on Matt Adams’ Fairways of Life satellite radio show, Chamblee said he expects both Woods and Mickelson to be not only Ryder Cup captains, but Presidents Cup captains as well. By then, however, Chamblee had done what he’d hoped to: he had gotten people’s attention. He put his name on the lips of golf fans around the world. Just like he knew he would.

Brandel Chamblee is good at his job.