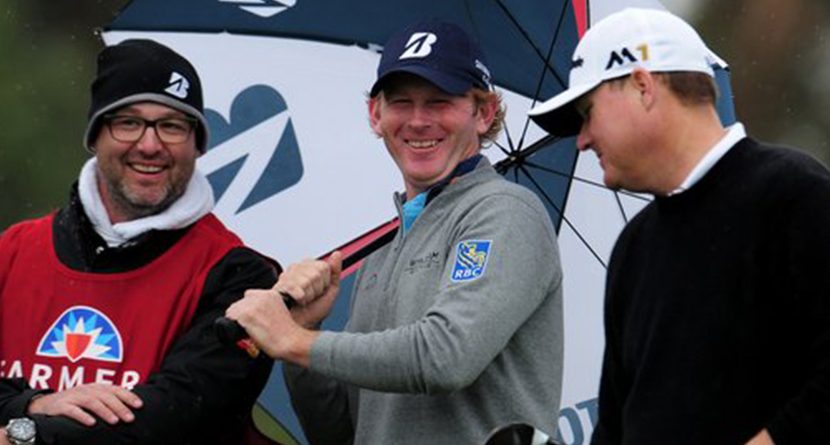 The South Course at Torrey Pines is routinely one of the toughest on the PGA Tour, ranking as the sixth most difficult track in 2015. Add the weather conditions players faced on Sunday at the Farmers Insurance Open and you have one of the most difficult days of golf many of these career professionals have ever seen.

Brandt Snedeker, who made the cut on the number, fired a 3-under par 69 in the final round to put 6-under par on the board as the leader in the clubhouse when play was suspended for the third and final time due to high winds. Jimmy Walker held the overnight lead at 7-under par, but still had eight holes to play in his final round.

“It’s like playing a British Open on a US Open setup”
-Sneddy on today’s conditions at Torrey.

Scorecard yardage at the South: 7,698 yards.

Colt Knost’s crazy birdie putt is even better when you listen to his tee shot. #QuickHits https://t.co/XUnv7BiZPa

How brutal is it at Torrey Pines right now?

And down on the green, after questioning rules officials of the playability of the course, Knost did this.

Further proof of how hard it was out there on Sunday:

The rain has passed, but play at Torrey Pines remains suspended because of extremely high winds. pic.twitter.com/9s9QhkMTHx

Play will resume on Monday at 8 a.m. PST. The weather forecast for the completion of the final round is expected to remain windy with speeds upwards of 25 miles per hour.