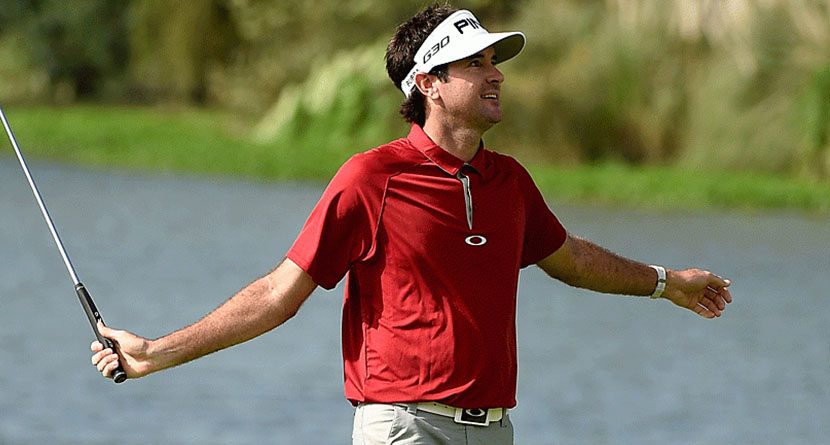 Bubba Watson, the man who withdrew from the event and eventually made his way back in as an alternate, leads the Hero World Challenge by two strokes over Paul Casey heading into Sunday’s final round in the Bahamas.

Watson and his wife, Angie, completed the adoption their second child, a girl named Dakota, in October of this year. Without the proper paperwork to bring the entire family to the event, Bubba backed out of the Tiger Woods-hosted tournament. Bill Haas took Watson’s original spot.When Jason Day withdrew to spend time with his new family addition, Watson was asked to be back in the fold. Angie was able to get the paperwork worked out for Dakota and the whole Watson clan is in Albany this week.

Bubba, despite fighting sightlines on the course, has shot rounds of 67-67-63 to take the solo lead in the 18-man, $3.5 million event. Watson’s third-round playing partner, Patrick Reed, is tied for third with Chris Kirk at 16-under; Jordan Spieth and Haas are tied for fifth, four shots back at 15-under par.

Saturday’s tee times were moved up as a result of the threat of inclement weather. While the weather was expected to move in during the early afternoon, a benign morning saw Watson, along with Casey shoot course-record breaking 63s. The previous course record was held by Albany resident Adam Scott and was then matched by Kirk on Friday.

Watson’s day was a veritable highlight reel, birdieing his first two holes, saving par with a lengthy putt on the third and handling the 489-yard par-4 4th hole in a measly two shots.

If only everyone’s golf ball could listen as well as Bubba Watson’s. #QuickHits https://t.co/3iAx2kwZPA

While Watson holds the outright lead, Casey’s exceptional round should not be discounted. The Englishman shot an outgoing 6-under par 30 thanks to six birdies against no bogies.

Paul Casey birdied every hole on the front nine that wasn’t a par 3. pic.twitter.com/4gPDQE5asI

He kept it going on the back, adding three more birdies during his bogey-free round.

Paul Casey is rolling it beautifully. This is his seventh birdie in 10 holes. https://t.co/pjhnlvizND

The final round will get underway on Sunday at 11:30 a.m. with Watson and Casey in the final pairing going off the first tee at 12:50 p.m. Coverage kicks off on Golf Channel at 12 p.m. and continues from 2-5 p.m. on NBC.