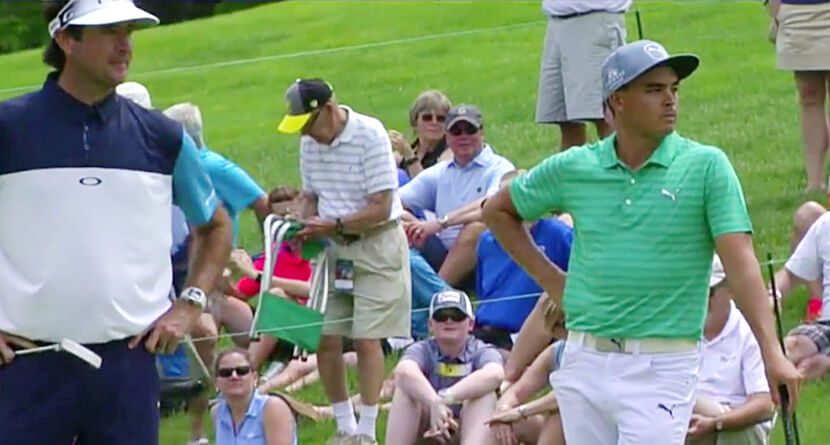 Rickie Fowler had a tough day at the office on Thursday at the Memorial Tournament. The No. 5 player in the world managed just one birdie in his opening round and shot a 3-over par 75 to sit in a tie for 107th after 18 holes.

Literally adding insult to a figurative injury, a boisterous fan heckled Fowler on the 9th green, his 18th of the day. After missing a birdie putt, among the groans, you can make out a fan yelling, “Nice putt, Rickie!” The usually reserved Fowler immediately looked in the direction of the taunt and after tapping in for par, playing partner and friend Bubba Watson came to Fowler’s defense.

Score some popularity points for Bubba.

Elsewhere, Dustin Johnson fired an opening-round 64 to take the first-round lead at 8-under par. Brendan Steele is one shot back at 7-under and Jason Day and Matt Kuchar lead the calvary at 6-under par, two shots back.

Phil Mickelson, Patrick Reed and Jason Dufner all shot 4-under par 68s to to stay within arm’s reach of DJ, while Jordan Spieth could only muster a 2-under par 70 and Rory McIlroy shot a 1-under par 71.

Here are the highlights, courtesy of the PGA Tour.