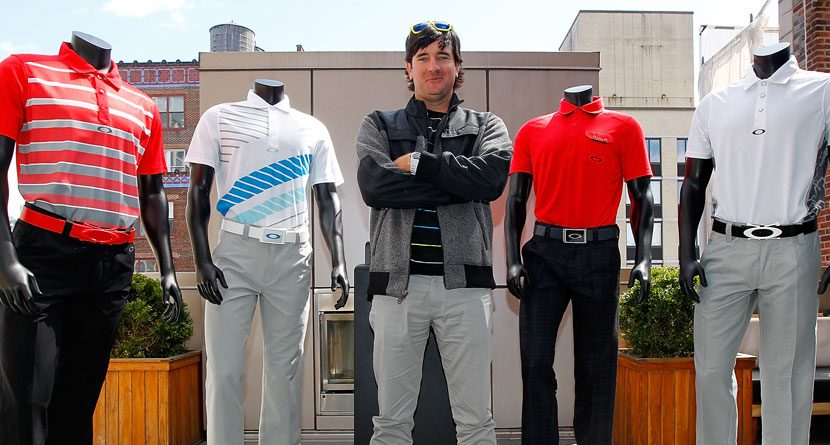 Bubba Watson is notorious for rocking the best Oakley gear on tour, and now it’s clear why. In the latest episode of the “Bubba Watson Show,” he goes behind the scenes at Oakley to see what their footwear line is all about.

While at Oakley’s headquarters, Watson also got a look at a custom pair of Ryder Cup golf shoes, made specifically for Watson’s feet. And yes, they’re amazing.

Watson is currently ranked No. 1 in the U.S. Ryder Cup standings, so he should be sporting red, white, and blue at Gleneagles come September.

Possibly the only thing better than his custom shoes for the Ryder Cup is the gigantic Oakley care package case that Watson gets delivered to the locker room for each tournament. I can only imagine what his fellow golfers think when they see the case in front of Watson’s locker each week.

We at Back9Network also got a behind-the-scenes look into Oakley’s headquarters to see what the brand is all about.

Other Hot Links:
– Back9Network Launches On DIRECTV Sept. 29
– The Fringe: John Daly Is A ‘Real American’
– Factory Worker Qualifies For The Open With Borrowed Clubs
– Tweek in Review: The Week’s Best Tweets
– The Dufners Had A Better Fourth of July Than You
– The Breakdown: The Numbers Reveal 2014’s Hottest Golfer
– On Display: John F. Kennedy’s Presidential Golf Getaways
– WGC-Match Play Gets New ‘World Cup-Type’ Format in 2015