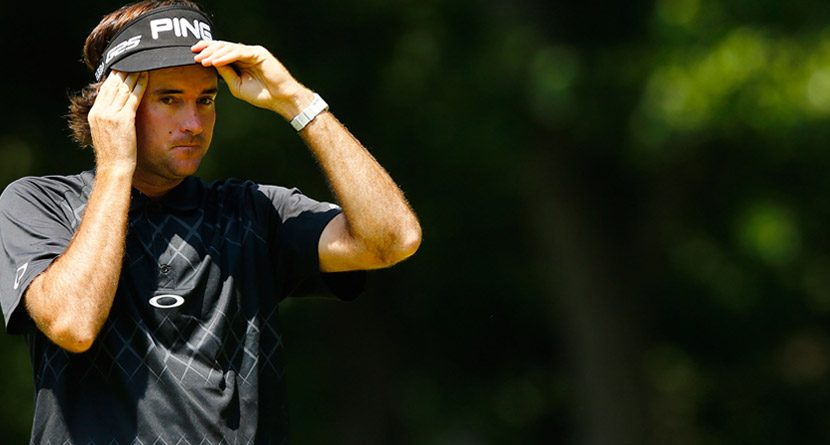 Related Link: Ken Duke Is Newest First-Timer to Win at Travelers | The 9: Inside the Back9Network Travelers Party

You know that awkward moment you feel at work when you overhear your boss tearing into a coworker? Everyone in the cubicles around you drops what they are doing just so they don’t miss any of the action. It becomes awkward, it becomes embarrassing and it basically turns into a train wreck.

Welp, Bubba Watson did that same thing to his caddie during Sunday’s final round at the Travelers Championship… and it was rough to watch.

As you can see, Bubba had a rough go on hole No. 16. His caddie, Ted Scott, had an even worse experience.

Make no mistake about it folks, the former Masters Champion can be a real jerk at times. This was not the first time Watson has lost his temper on – or off – the golf course by way of a public spectacle, either.

Some fans will remember his on-air tirade aimed at former PGA Tour pro Steve Elkington in 2008 at the Zurich Classic in New Orleans. The dispute – which was reportedly prompted by a simple rule disagreement — got so heated that a tournament rules official had to be called in to settle both men down.

Off course, any of his 900,000 Twitter followers can tell you that Bubba enjoys voicing his religiously-biased opinions on social media, often to a stereotypical degree. While certainly in his right to preach whatever he wishes in a public forum, Watson has been known to get into heated tweet-arguments from time to time.

Arguments and disagreements between players and their caddies are common. The two individuals are a close-knit team during golf tournaments, and teammates sometimes disagree. But there is a time and a place for voicing those disagreements, especially when talking about the gentlemanly arena of a pro golf tournament.

We will be keeping an eye on how this recent debacle impacts Watson’s relationship with his long-time caddie. Don’t be surprised if there is a new man on Bubba’s golf bag by the British Open.