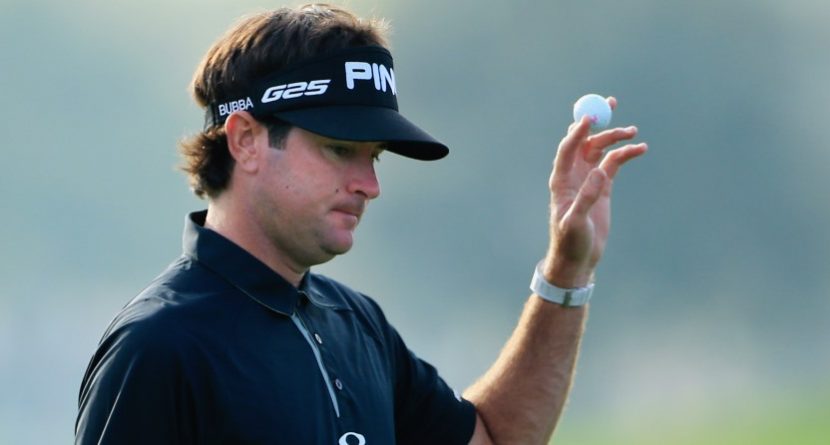 Adam Scott enjoyed a nice little Thursday. The world No. 2 carded 10-under 62 in the first round of the Arnold Palmer Invitational, tying Bay Hill’s course record.

Bubba Watson – No. 4 in the FedExCup standings – on the other hand, had a day he’d rather not remember. He finished the day 21 strokes behind Scott, or 11 over par. A triple-bogey 7 on 18 didn’t help, but the sextuple-bogey 11 on No. 6 hurt most.

Watson promptly withdrew after the round, and attributed his poor play to allergies:

Just wanted to tell my fans I'm sorry I had to withdraw from @APinv this week. My allergies have taken over!

And so he joins the list of most odd excuses for withdrawing from a golf tournament:

Rory McIlroy’s Toothache
After shooting 7-over-par through eight holes in the second round of the 2013 Honda Classic, McIlroy walked off the course. He cited a toothache for his withdrawal. Whether or not that was true – he was spotted eating a sandwich earlier that day – it became clear that mental issues were creeping in. That was just the start of arguably the worst season of McIlroy’s young career.

Sergio Garcia’s acne
The Spaniard was just 19 years old when he was set to compete in the 1999 St. Jude Classic. But instead of playing, he underwent surgery to take out an abscess above his left eye. The growth was apparently a result of acne buildup.

Lucas Glover’s paddleboarding
The 2009 U.S. Open champ was in Hawaii early in 2012 and all set to take part in the season-opening Tournament of Champions. Then he went paddleboarding in the ocean, got his foot caught on the side of the board, and sprained ligaments in his right knee. He withdrew from the event, marking the second straight year someone withdrew in Kapalua after injuring themselves in the ocean; Geoff Ogilvy cut a finger on coral the previous year.

Jim Furyk’s Teeth Brushing
In 2006, Furyk finished brushing his teeth and tossed his head back to pop in a pill. That move tweaked his back and neck, and made it tough to turn his head to the left – a sort of crucial aspect when you’re a right-handed golfer wanting to look down the course. The injury forced Furyk to withdrawal from the Barclays Classic the following week.

Oliver Wilson’s Snowball
Early in 2013, Oliver Wilson broke his wrist and had to withdrawal from the Dubai Desert Classic. The reason? The Englishman was avoiding a “deadly snowball” and slipped in the snow (obviously before he arrived in Dubai). The injury kept him out of golf for six weeks. “If I’d known I’d get injured at home, might as well have gone skiing!” he tweeted.