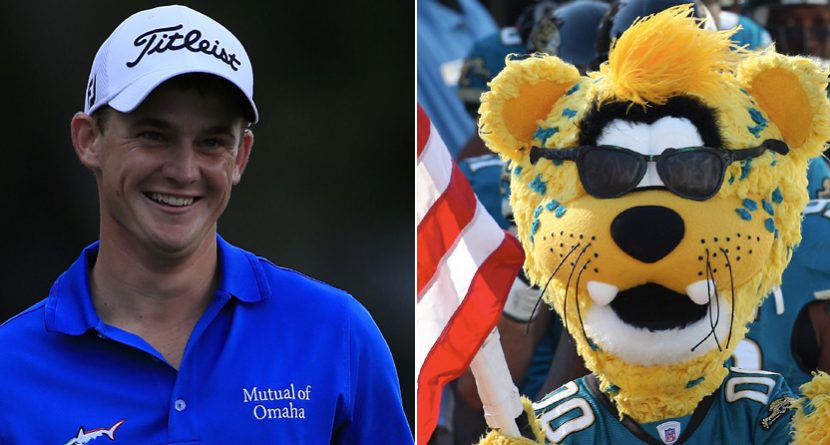 With a solid 27-20 victory over the Houston Texans on Thursday night, the Jacksonville Jaguars – who were once 0-8 – extended their winning streak to three games. It marked their fourth win in five games, and was their first of the season at home.

But that was as far as the winning went last night at EverBank Field. The team’s mascot, Jaxson DeVille – who’s been having closest-to-the-pin contests with pro golfers at halftime of each game in Jacksonville – couldn’t create a winning streak of his own.

After securing his first W of the season on Nov. 19 against Mark McCumber, Jaxson moved to 1-4 on the season after falling to 23-year-old Jacksonville native Bud Cauley on Thursday.

http://t.co/llbTTieuYl knocked one in there close to edge out jacksonDeville at halftime for charity

The contest takes place during halftime of every Jaguars’ home game, of which there will be seven total this year (one of their games was moved to London on Oct. 27). Both the mascot and golfer hit a 125-yard shot from the Sky Patio in EverBank Field’s south endzone to an island green at midfield (a nod to the famous 17th hole at nearby TPC Sawgrass). If the pro wins, the Jaguars Foundation donates $10,000 to a charity of that player’s choice. If Jaxson DeVille lands his shot closer than the pro’s, the Jaguars Foundation will give $1,000 to the player’s charity and every fan at the game gets a complimentary order of Papa John’s cheesesticks. And if either one sinks a hole-in-one, a fan selected prior to the game receives $1 million from the Jags.

The money Cauley earned will go to the Bud Cauley Foundation, which raises money and awareness for military-related charities.

Jaxson’s next chance to earn cheesesticks for the crowd will be Dec. 15, when the Jags face the Buffalo Bills, and his last will be a week later when the Tennessee Titans are in town.