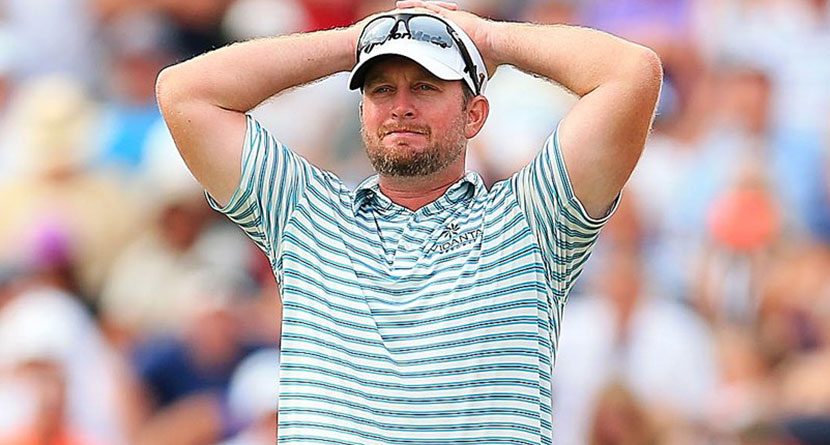 Golf is hard (and heartbreaking).

A free-for-all final round at the Canadian Open that saw no less than 9 guys with a chance to win had the energy sucked out of the event near the 18th green. Steve Wheatcroft, a journeyman pro in search of his first PGA Tour victory, found the back bunker in two on the par-5 18th needing a birdie to tie clubhouse leader Jhonattan Vegas.

Wheatcroft dug into the back bunker and immediately knew something was off: there was hardly any sand in the bunker.


To Wheatcroft’s credit, he took the bad break in stride making a joke on Twitter after the round.

Does anyone know if Lowes or Home Depot is having a sale on sand this week?

Canadian Graham DeLaet responded, saying that Wheatcroft wasn’t the only one to have trouble in the Glen Abbey bunkers.

@wheatiePGA I felt for you man. Happened to me too, and I spoke to two other guys who boned a bunker shot this week.

As it turns out, DeLaet and Wheatcroft were right. The bunker clearly only had an inch or so of sand, which is well below the Tour-required level.

No doubt at all there wasn't enough to meet the tour's official guidance. Which reads (see next tweet) https://t.co/jP5drQVnSG

Vegas was the benefactor of the tough break for Wheatcroft. Teeing off more than an hour before the final pairing, the University of Texas product, by way of Venezuela, fired an 8-under par 64 to post at 12-under par, which eventually would prove to be the winning score. Dustin Johnson, Jon Rahm and Martin Laird shared runner-up honors while Wheatcroft, Brandt Snedeker, Ricky Barnes and Alex Cejka made up the four-way tie for fifth.

The full highlights can be seen here, courtesy of the PGA Tour.

The full leaderboard can be found at this link.