By the Numbers: Tiger Woods vs. Jack Nicklaus 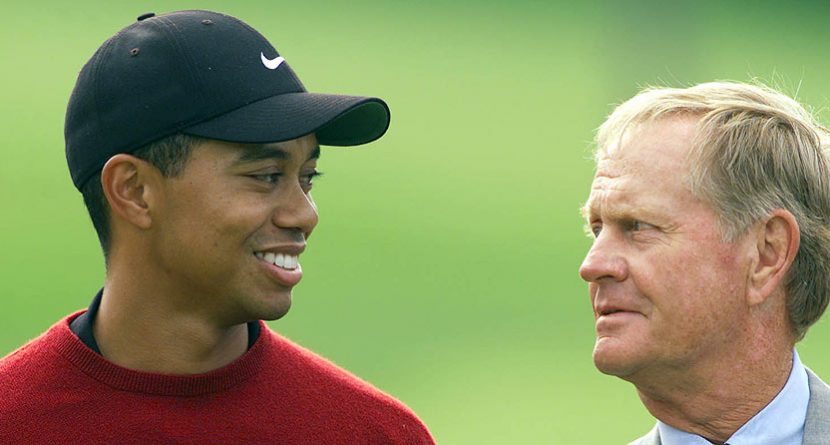 One moment we’re asking is Tiger Woods back? Then we’re questioning Tiger’s back. The questions and debates are endless, but the underlying issue is whether or not Tiger’s latest injury woes are ultimately going to hurt his chances of breaking Jack Nicklaus’ record of 18 major titles.

One man who shares that worry, is 7-time major champion and host of this week’s PGA Tour event, Arnold Palmer. On the topic of Tiger’s injury and its affect on his quest for 19 majors, Palmer said: “I think it lessens the possibility of that happening. It’s going to be tough.”

It is easy to see that both men reached their 38th birthdays with 14 majors in their trophy cabinet, but a deeper look into the numbers shows just how important 2014 could be for Tiger and his hunt for No. 19.

When Tiger finished a lowly T-40 at the 2013 PGA Championship, he finished his 70th major without a win. Twenty-two majors have now passed since Tiger last won a major at the 2008 U.S. Open on one leg, begging the question: Has Tiger fallen behind Jack’s pace?

The simple answer is no. Tiger’s major success started early in this career. Amazingly, he took eight of the first 22 majors he played as a professional. Similarly, Jack won seven of his first 22 majors as a pro, but Tiger has almost always been ahead of Jack’s pace of 18 majors.

In age terms, when Tiger won the 2000 Open Championship at St. Andrews, he moved ahead of Jack’s pace. Tiger was just 24 when he won his fourth major, while Jack was 25. Tiger kept ahead of age-pace for 11 years, until two days after the 2011 Open Championship (which he did not play due to injury), when he and Jack became tied in terms of major victories by age.

Sounds pretty simple right? He won five times in 2013, surely he can knock off a major in 2014. Truth is, Tiger is in the biggest major drought of his career.

Only one other time since his career-year in 2000 has Tiger had to wait more than a year to win a major (2002 U.S. Open until the 2005 Masters, a total of 10 majors). While he has had some injuries and “transgressions” in his latest cold-spell, 22 majors without a win from the world No. 1 is surprising.

Based on events played, Tiger has all four majors in 2014 to stay ahead of pace. Jack won his 15th major in his 75th attempt. The Masters will be Tiger’s 71st major. So as much as it may seem that Tiger has fallen off the pace to surpass Jack’s record of 18 majors, that’s not the case just yet.