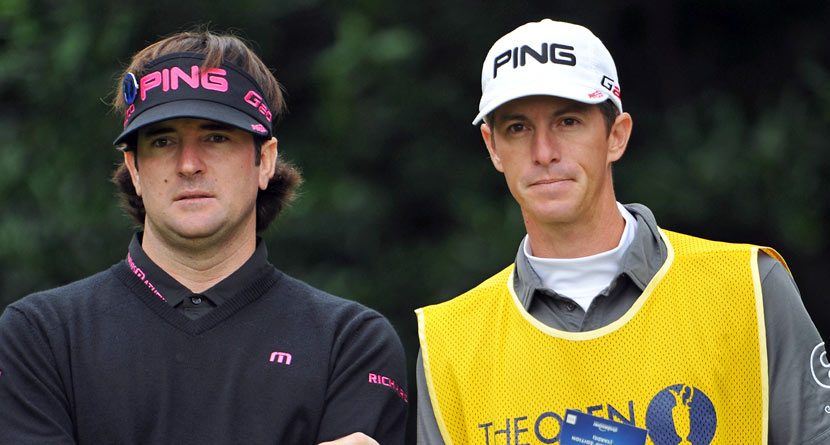 Caddie firing is all the rage again but it is hardly a new story.  There is one misconception that I would like to clear up immediately.  The idea that caddies are somehow subservient and therefore defenseless in disagreements with their players couldn’t be further from the truth.  Although the percentage of player-caddie relationships that end with a caddie leaving a player are decidedly fewer than the other way around, it does happen and with far less publicity.

In 1996 I was a rookie on the PGA Tour struggling to get in events on the West Coast.  I was a long way from home and what seemed like a million miles from the celebration a few months earlier after a successful trip through Q School.

I finally got into what is now the Farmers Insurance Open at Torrey Pines.  My caddie, who had looped most of the year before on what is now the Web.com Tour, was as frustrated as I was with the predicament that we faced.  So we were elated to be in the field for the first time in a month.  I shot four under par on the North Course in the opening round.  On Friday afternoon we stood in the middle of the 18th fairway, 2 under on the day and 6 under for the tournament.  The cut was going to be 4 under and we still had not made our first check on the PGA Tour. At the time the 18th was still a very reachable par five.  I had 220 to carry the water in front and 236 to the hole over on the left side of the green.  It was a little down wind so it was a perfect 1 iron.  (OK…this was the dark ages long before hybrids.)  My caddie implored me “lay up to a wedge yardage and make birdie,” playing to my strengths.  It was a compelling argument… but I really wanted to knock it on the green.  The compromise was to go ahead and hit three wood and if it bounced into the bleachers long I would get a free drop and have a relatively easy up and down.  This way we’d take the water out of play and still have a chance to make 3 or 4.

Sounds like a reasonable compromise but for some reason I was not convinced and therefore uncommitted to the shot.  Maybe that is why I laid the sod over the three wood and dumped it into the pond in front.  That is not, however why I spun the sand wedge I hit for my fourth shot back into the water.  That was rookie frustration and a result of not understanding the situation.   Why I ended up hitting my 6th shot 20 feet from the hole and making 8 to miss the cut by a shot isn’t exactly the stuff of Agatha Christie, but that didn’t matter.

Words like “unhappy” and “despondent” don’t cover the way that I felt.  I was pissed off.  But, of course, so was my caddie.  When I clanged down the metal steps in my spikes from the scoring trailer my caddie couldn’t make eye contact.  The next words that I heard were, “I can’t do this anymore.  If we can’t work together this isn’t going to work.  You should find someone else to work next week.”  So I was fired, which wouldn’t have been so bad… if we hadn’t been married.

That is right, I was fired by my caddie-wife right behind the 18th green at Torrey Pines in my third start on the PGA Tour. Very few players these days have their wives caddie for them, so few will suffer such an unceremonious fate.  However, what most people don’t realize is that most players spend more time with their caddie than they do with their wives.  Maybe the players at the top who only play 20 weeks a year don’t, but spend 30 weeks out there on the road and you’ll spend more time with your caddie than anyone else on the planet.

If familiarity really does breed contempt it is important to remember that is a two way street.  Add that to the fact that every week there is the potential to have both people placed in the most high-pressure situation that either has ever seen and the short fuse of a powder keg is ready to be lit.

What happened at Travelers with Bubba or the Women’s U.S. Open with Jessica Korda and apparently a couple of others is not only predictable, it is likely and common.   If you are willing to concede that a player-caddie relationship is a lot like a marriage then it is no surprise that very few endure.  Obviously Bones and Phil or Freddy and Hal Sutton are the exceptions to the rule.  Tiger’s career has seen three caddies and as many swing coaches.  That is far more normal.  As for me, I can’t count the number of caddies that I had in my 15 years in professional golf.  I will say that if I let 10 go it was for 10 different reasons.

There were an equal number of caddies who fired me.  Mostly they left for other bags with higher salaries or younger, more talented players.  Or maybe they just couldn’t stand to be around me anymore… I am pretty sure that was the case at Torrey Pines.  The dynamic is complicated and as profiles and purses continue to increase it will only get more difficult.  There will be more fireworks and some will be caught on camera.  There is no other relationship like it in sports.

Incidentally, the next week a buddy caddied for me in Hawaii and we made our first cut and our first check.  The wife was there with a smile on her face.  She returned to the bag and was looping later that year when we lost in a playoff at Callaway Gardens.  She fired me the next year in Dallas when the player’s wives were given a variety of complimentary spa treatments for the week.