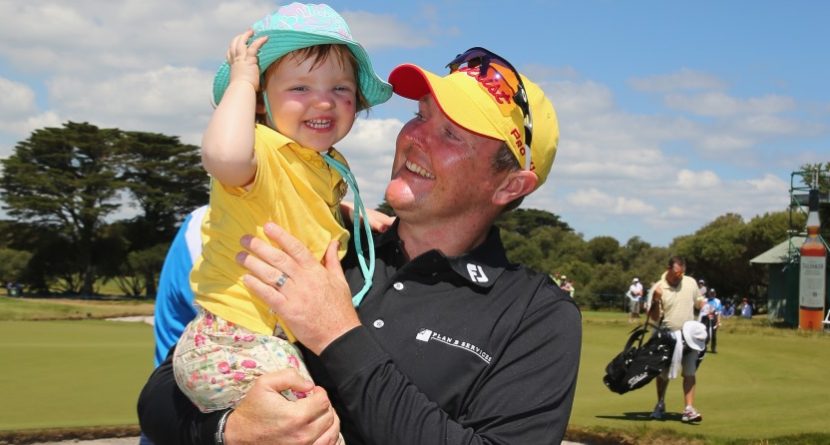 Australian cancer survivor Jarrod Lyle triumphantly returned to golf last fall, impressively making the cut at the Australian Masters in his first pro tournament in nearly two years. This fall, the 32-year-old plans to make a proud return to the PGA Tour.

Flights are booked for June 17th. Look out America, the Lyles are coming back. Planning on starting PGA tour in October for 2015 season.

According to The Courier-Mail, Lyle’s eyes are set on the Frys.com Open in October, which kicks off the PGA Tour’s 2014-15 season. Upon learning of his acute myeloid leukemia returning (he also battled it as a teenager), Lyle received a medical exemption from the PGA Tour, allowing him to rejoin the circuit whenever he felt healthy enough. That time has come.

He’ll prepare with three appearances in four weeks on the Web.com Tour, starting July 24 at the Midwest Classic in Kansas City. Lyle will be based in Orlando and have his wife, Briony, and 2-year-old daughter, Lusi, along with him.

“I didn’t think it was going to be possible a while ago, but now there’s that light at the end of the tunnel and that’s the PGA Tour again,” Lyle said. “There was a time (in 2012) when if I never played golf again I wouldn’t have cared. But now things are back where they need to be and the golf’s in a reasonable shape again. It seems like the right thing for me to get back to playing.” After Lyle fought a battle with leukemia and won at the age of 17, he thought nothing could stand in his way of becoming a professional golfer. He accomplished that goal, turning pro in 2004 and earning a coveted PGA Tour card in 2007.

But as a 30-year-old in March 2012, acute myeloid leukemia returned. It could have derailed his still-young golfing career, but Lyle let nothing stand in his way of getting back on the course. After 20 months away from the game, Lyle returned to professional golf at the Australian Masters in Melbourne. In February, he competed in the Victorian Open and missed the cut.

Watching her dad play professional golf for the first time in Melbourne was Lusi, who was born a few months after Lyle’s second diagnosis – and despite doctors’ warnings that the chemo from his first bout with cancer could have left him sterile.

Says Lyle, “Bri and Lusi are the main things, mate – the golf is just a huge bonus.”