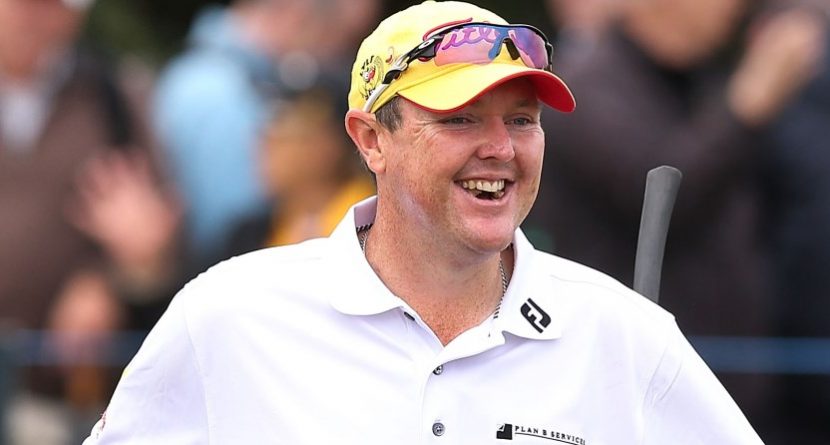 With a bogey 5 on his 72nd hole at the Mayakoba Golf Classic in Riviera Maya, Mexico, on Feb. 26, 2012, Australian Jarrod Lyle carded a final-round 69, leaving him at 2 under par for the tournament, tied for 37th place.

He earned $15,170 for his efforts – a nice chunk of change, but a far cry from the $259,875 he collected just a week prior for his T-4 finish at the Northern Trust Open in Los Angeles. He came in behind only Bill Haas, Keegan Bradley and Phil Mickelson – American stars every one of them. That marked the best result of Lyle’s career, and thus, the largest paycheck he’d ever received for playing golf.

Much of it, unfortunately, was soon spent on medical bills. The Mayakoba Golf Classic was the last professional event Lyle played that year, and for the next 20 months. In March 2012, Lyle was overcome with acute myeloid leukemia. For the second time.

“Things couldn’t have been any better and then all the sudden, you sort of get that all ripped away from you with the bad news that your leukemia has returned,” Lyle said on a conference call with reporters.

Lyle’s journey back to the PGA Tour resumes this week.

He made an emotional return to golf last November, and surprised even himself by making the cut at the Australian Masters. Now, he has returned to the U.S. with a mission of returning to the top tour in golf. That quest begins with the Web.com Tour’s Midwest Classic, which tees off Thursday in Overland Park, Kan.

Lyle posted a message for his fans on Monday:

Following the Midwest Classic, Lyle will take a week off as he and his family – wife, Briony, and 2-year-old daughter, Lusi – hop in their RV and travel to Springfield, Mo., for the Price Cutter Charity Championship from Aug. 7-10. The Lyles will then cruise right down to Knoxville, Tenn., for the News Sentinel Open Aug. 14-17.

From there Lyle will return to his base in Orlando, Fla., and await the Frys.com Open, which kicks off the 2014-15 PGA Tour season. As part of his PGA Tour medical exemption, Lyle is allowed five warm-up events, which he’ll use up with the Web.com Tour stops. In addition to the Australian Masters, he also played the Victorian Open in February, missing the cut.

“It’s obviously very exciting to get back out there and play, but it’s also scary,” Lyle said. “Not being able to play golf tournaments since February of this year, there’s a lot of unknowns there on how my golf game is going to shape up.”

After Lyle fought a battle with leukemia and won at the age of 17, he thought nothing could stand in his way of becoming a professional golfer. He accomplished that goal, turning pro in 2004 and earning a coveted PGA Tour card in 2007.

The disease’s return in 2012 came just months after the birth of Lusi, a near miracle considering doctors thought the chemo from his first bout with cancer could have left him sterile.

Said Lyle in April, when he announced his intentions to get back on the PGA Tour, “Bri and Lusi are the main things, mate – the golf is just a huge bonus.”