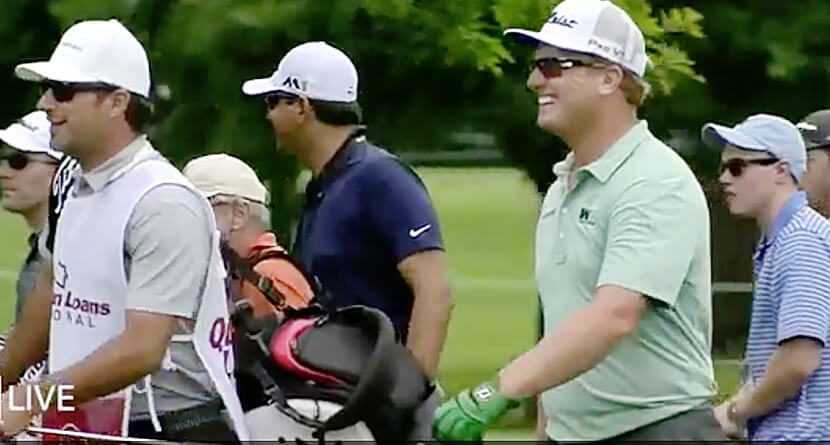 Caddying can be a pretty thankless job. The old adage goes that to be a good looper, you need to adhere to the three ups: show up, shut up, keep up. However, in recent years, working as a professional Tour caddie has become a much more desirable profession. Latching on with the right pro can be both lucrative and exhilarating, traveling the world and seeing the best courses each locale has to offer.

Not to mention, your office is a golf course. Life could be worse.

All of that was just a build up to seeing a caddie get hit with a golf ball, which leads us to Charley Hoffman stymied behind a tree during the first round of the Quicken Loans National, trying to punch out on the 4th hole at Congressional Country Club.

Sometimes, all you can do is smile. https://t.co/vsLGg5SjTW

The victim was Ernie Els’ caddie, Ricky Roberts. Roberts wasn’t hurt, Hoffman made par and everyone left with a good laugh.

Hoffman ended up firing a first-round 4-under par 67 to sit three shots back of Jon Rahm, the Arizona State product making his professional debut this week. Jhonattan Vegas is at 6-under par while Bill Haas and Ernie Els enter Friday’s second round two shots back at 5-under par. Rickie Fowler shot 3-under par 68 and is looking for his first made cut in his last four tournaments.

Here are the full first-round highlights courtesy of the PGA Tour.