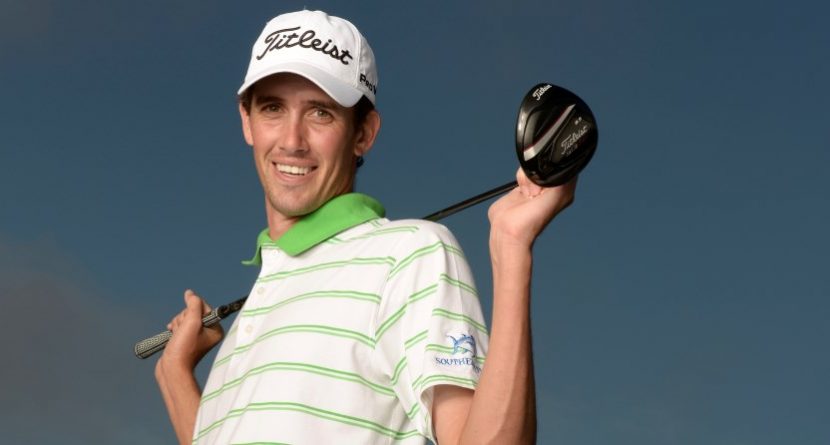 We should all hope to see more of Chesson Hadley. The 26-year-old is enduring his rookie season on the PGA Tour, but if this kid ever wins big, the talk shows will be lining up to book him.

Hadley is the latest subject of “Inside the PGA Tour,” and among his many delightful quotes, he offers some sage advice for getting out of a bunker: “Sun’s out, guns out.” Guns, of course, is a relative term:

Turns out Hadley hasn’t changed much since high school. “I have never considered myself to be an incredibly mature person,” he says.

According to his wife, Amanda, he was the class clown while she was the valedictorian. “She is a grade older than I am, which I’m very proud of,” he says. “I married an older woman. Love that… You kind of dream about that as a high schooler, right?”

On a more serious note, that goofball is now a father and needs to provide for his family. Though he’s missed the cut in six of 10 events this year, Hadley also has three top-25 finishes and has banked more than $430k. He’s down at the Puerto Rico Open this week, fighting to keep his card after an incredible 2013 season that saw him win the Web.com Tour Championship.

Other Hot Links:
– Mantys: The Latest Innovative Way to Get Around a Golf Course
– 5 Things You Need to Know: Cadillac Championship
– The Fringe: Dufner’s ‘Caddy’ & Meghan Hardin Pumps You Up
– Will Ferrell’s Desert Showdown Smells of Rich Mahogany
– Tiger’s Back: Woods Set to Play WGC-Cadillac Championship