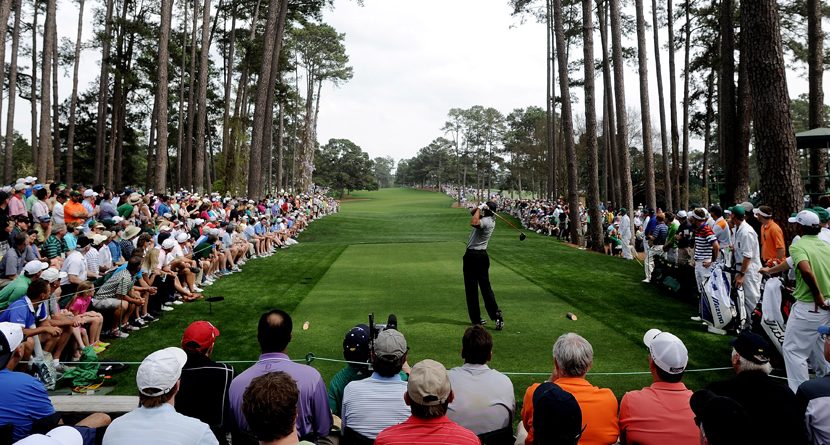 I woke up this morning and couldn’t wait to get to Augusta National. Today was not just the first round of the Masters; it was the first time I would follow my uncle Tiger Woods in a major championship.

I arrived at the course early and while I was waiting for Tiger to come out of the clubhouse, I met Nike founder and CEO Phil Knight. I also saw Tiger’s girlfriend Lindsey Vonn. Both were here to follow him during his round.

At 10:20 a.m., there was a buzz in the air among the thousands of patrons milling around the clubhouse and the first tee. Tiger’s tee time was still 25 minutes away. Every minute that passed brought more and more patrons to the area. I could feel the eagerness of everyone around me. We were all there waiting for one person.

Suddenly a silence came across the crowd. A path was cleared from the clubhouse by police officers escorting Tiger. You could hear a pin drop. It was as if everyone in the area held their breath as Tiger exited the clubhouse and made his way through the crowd ahead of his 10:45 tee time. His presence captivated even me as he walked through the patrons, head down and focused as ever.

I’ve watched my uncle play in a handful of tournaments, but never a major. Regardless of the venue, Tiger’s fan base is always enormous. I realized early on that I would have to stay at least one shot ahead if I wanted any chance to actually see him hit a shot. To be among the thousands watching the No. 1 golfer in the world, I was able to see how emotionally invested they were in every single shot. When Tiger made his first birdie of the day on No. 6, the crowd was almost in unison in saying “yes” and cheering as we all made our way to the next tee.

I’ve had the opportunity to play in both LPGA and Ladies European Tour events, but never in front of crowds like the ones Tiger draws. The energy is electrifying. Today I was one of thousands with eyes glued to Tiger, Luke Donald and Scott Piercy. I can only imagine how difficult it was for a first-time Masters competitor like Piercy to be paired with Tiger. I was almost nervous for him!

While Piercy struggled and shot a 75, Donald tallied a 1-under 71. Tiger was satisfied with his opening-round 70. While it’s probably not going to be a round he remembers years from now, it was a very special day for me, and one that I will remember for a very long time.

To see more from Cheyenne Woods this week at the Masters, check out…

What Cheyenne is wearing this week at Augusta National