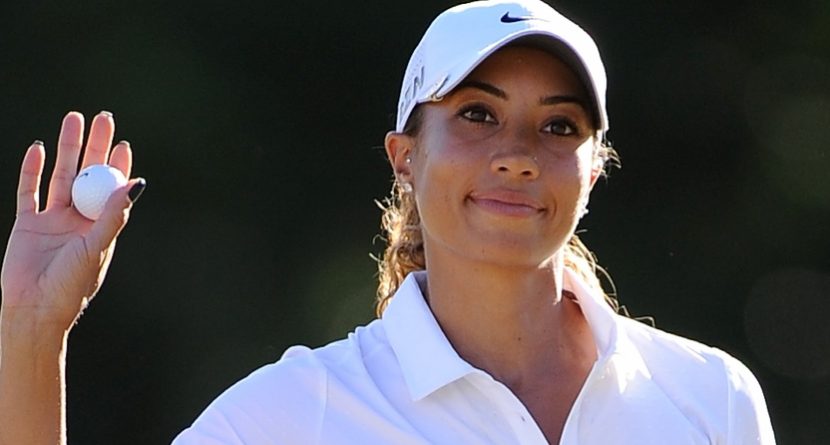 Mike Labauve met Cheyenne Woods more than a dozen years ago in their hometown of Phoenix. The noted golf instructor was asked by the late Earl Woods, father of Tiger Woods, if he could teach his granddaughter. Seeing potential, Labauve agreed.

Labauve continues to see promise in Cheyenne to this day, and told her as much last month before she left Phoenix for her sophomore season on the Ladies European Tour. His words might have seemed hollow when she missed the cut at the New Zealand Open, but they proved prophetic when she won the Australian Ladies Masters on Sunday, her first professional victory on a major tour.

“I’ve been working with my swing coach, Mike Labauve, for about 13 years now. We worked a lot on my short game this off season and we felt that that specifically would make a huge difference in my game and allow me to have better results for this year,” Woods said via email from Victoria, Australia, where the Back9Network ambassador is set to tee off Thursday in the Women’s Australian Open.

Came back to find this in my hotel room today! Thank you to my @Back9Network family!! So sweet! pic.twitter.com/ZozXCrLeSx

That short game helped her fend off Australian amateur Minjee Lee down the stretch on Sunday. Woods held a single-shot advantage as she reached the par-5 15th hole. After her third-shot approach with a wedge stopped four feet from the cup, she rolled in a birdie to move two strokes ahead with three holes to go. Another birdie on 18 secured the big win.

“My game came together so nicely this past week,” Woods said. “After coming off a missed cut the week before I was a bit disappointed and worked on a few things for the Masters. Fortunately it paid off and my game felt great. I was very happy with how I performed mentally as well. To be able to have the lead for two consecutive days and pull through with a win was huge for me.”

Woods opened with a 4-under-par 69 to sit just one shot off the lead, then turned in a 67 in the second round to move into a tie atop the leaderboard with Stacy Lee Bregman.

“It was the third round that I had some nerves simply because of it being a new situation for me,” Woods said.

But she fought them off, saying she stayed mentally strong, and posted a 2-under 71. That was a slight step back from her first two rounds, but it was better than the field. Woods owned a one-shot edge going into Sunday.

That allowed her to play loose, and it showed, as she was spotted smiling and seemed relaxed during her final 18 holes. She carded a birdie on the first hole, which she eagled on Friday, then posted a bogey on No. 4. From there, though, she sank only birdies (four) and pars (10).

And thus, she collected her first victory since winning a SunCoast Ladies Series event in 2012. Some might expect the trophies to pile up because she carries the same surname as the best active golfer in the world. That has always brought Cheyenne a little extra attention, but she can’t compare herself to her uncle. All she can do is put in work.

“I hadn’t been putting any pressure on myself to win an event. It was definitely a goal, but I was looking to just play consistent this season,” Woods said. “I had worked hard in the off season on certain aspects of my game, so I was focused mainly on seeing that improve throughout the year.”

“It just proves to myself that I am able to compete and win at this level of competition,” Woods said.