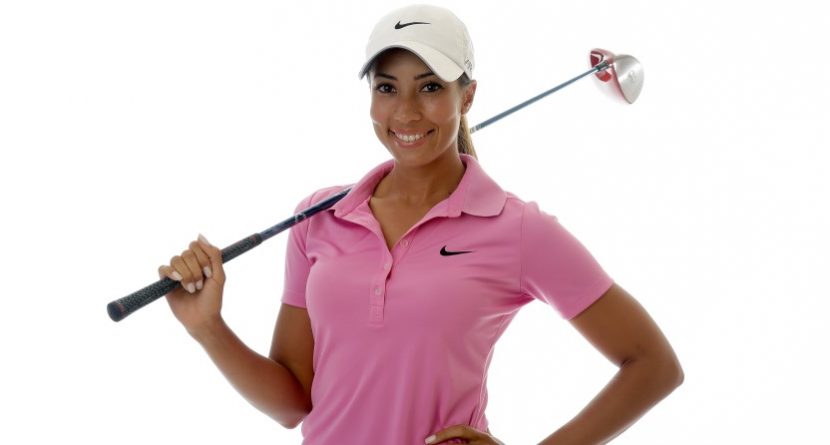 Cheyenne Woods enjoys a fervent following at just about any tournament she plays. Something about that surname of hers.

Yet there are a few more fans in her pack this week at the 2014 U.S. Women’s Open in Pinehurst, N.C. The resort’s famed No. 2 course sits 90 minutes down Interstate 74 from Winston-Salem, home of Wake Forest University, where Woods starred for four years.

“I’ve had a lot of support from the Wake Forest fans,” Woods said in an email from Pinehurst. “I love walking down the fairway and hearing ‘Go Deacs!’ Makes me feel a little bit at home. I love North Carolina and it feels great to be back.”

Practice round this morning with the lovely @sies07 and our head coach from Wake Forest, Dianne Dailey #GoDeacs !! pic.twitter.com/ge0IqldOYy

They make up one of the marquee groups to watch.

“It’ll be a great two days with both Juli and Natalie. As a junior golfer I always enjoyed watching these two play. I’m looking forward to competing alongside them this week,” Woods said.

@Cheyenne_Woods and I close to twins. We are paired together for first two rounds of @usopengolf pic.twitter.com/rgsRZrF7Mx

Woods is obviously the greenest of the group, but this isn’t her first venture inside the spectacle that is the U.S. Women’s Open, the female game’s most prestigious event. Fresh out of college and just weeks after turning pro, she earned a spot two years ago via a qualifying tournament in Sanford, N.C. This year, Woods got in through a qualifier in Scottsdale, Ariz.

That first trip was more of a “just happy to be here” experience. This second one is business-like. Woods enjoys full-time status on the Symetra Tour, which is the LPGA’s developmental circuit. She can also play on the Ladies European Tour, and accept sponsor invites to LPGA Tour events. The goal is to gain full-time status on that last tour, the most elite in women’s golf.

Woods wants to use this week to show she belongs.

“I have a year and a half of professional golf under my belt now. I’ve been able to gain a lot of experience since my last U.S. Open by playing LET/Symetra Tour, and I’m ready to take on this week,” she said.

Amazing fans here at Pinehurst! It’s going to be a great week! pic.twitter.com/F1D3CjlNjn

Pinehurst marks just the first major of the year for Woods, who has also earned berths into the two such events that take place later this summer on European soil: the Women’s British Open and Evian Championship. Those invites were issued as a result of Woods’ first major pro tour victory in February at the Australian Ladies Masters.

Woods’ debut in a major came at the 2012 LPGA Championship, and she also competed in the Evian Championship’s first go as a major last year. In her three major tournament appearances, she has yet to make the cut. She plans to cut that streak this week.

Unfortunately, Woods won’t have the luxury of using her uncle’s yardage book (i.e. cheat sheets) like she may have optimistically hoped when it was first announced that the U.S. Women’s Open would immediately follow the men’s major on the same course. Some men’s players were spotted handing those off to the ladies as their tournament ended and the women’s began. But Tiger Woods missed his second straight major championship while recovering from back surgery.

That’s not to say one of the four Wake Forest alums in the men’s field didn’t pass along some tips to the 23-year-old Woods. Regardless, she’s eager to attack the course that only allowed three men to go under par.

“The course is in great shape and it’ll be a true test for us competing this year,” she said. “I think it’s a fun course to play because it really forces you to strategize and be creative.”