Cheyenne Woods Is More Determined Than Ever 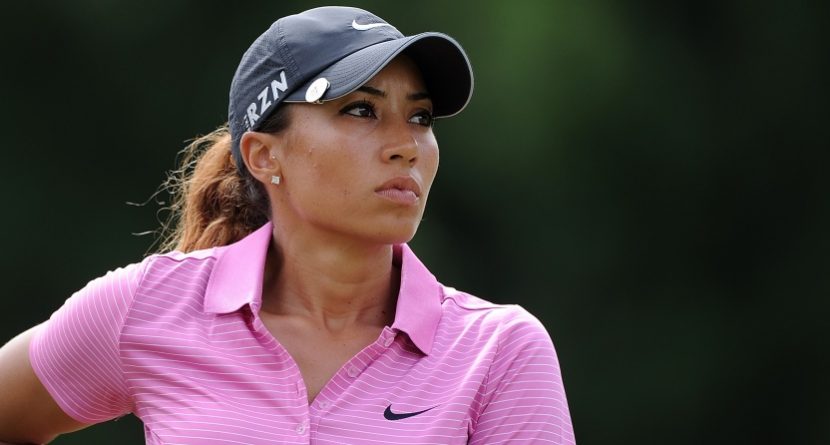 In the world of golf, Woods is a very popular name. But if you haven’t heard of Cheyenne Woods, don’t be surprised if you start hearing more of her soon.

At the age of 23, Cheyenne has garnered a lot of attention since she turned professional at the end of 2012. She acknowledges that having the last name Woods has certainly helped with receiving notoriety. However, she wants to separate herself from being Tiger’s niece to showing the golf world that she can play with the best. Woods did just that at the Ladies European Tour event at the Volvik Masters in Australia in February, shooting a four-day total of 16-under-par.

Cheyenne and I have played together a couple of times in the last few months: once in the final round of the second stage of LPGA Qualifying School, and a practice round at the LET event in New Zealand. One thing that has always impressed me about her is how she handles all the attention and manages to stay focused. More importantly, Woods understands how fickle golf can be. Since both of us turned professional, we know the hardships of golf and the ups and down of the game. The week before her win in Australia, she missed the cut in New Zealand. I led the New Zealand event going into the final round, finishing third, then missed the cut following week. Cheyenne found a way to channel something deeper within herself going into the Volvik Masters.

“You can’t base everything off one week,” Woods said. “When I missed the first cut of my season, I questioned myself and talked to a few people and they told me I needed to focus on the new week. I looked back at the work I put in the offseason and knew it had to pay off.”

Pay off it did. She never lost face the entire week and played steady. As I watched the live television broadcast from my hotel room on the final day of the tournament, I knew something special would take place if she won the event. Cheyenne would help catapult women’s golf into the forefront of people’s minds.

Of course, with winning comes the pressure to continue doing so. No pro golfer wants to be a one-hit wonder. Cheyenne has a good sense about her abilities and a wonderful quiet confidence that makes anyone see that she will again, especially that now she knows can beat some of the best players in the world.

“It gives me a lot of confidence to show that I am able to compete as myself and have my own game and identity,” said Woods. “If I look back to when I was 13, this is exactly where I wanted to be in life. I now know if you stay committed to what you want to do in life you can do it. Success to me is keeping my card and going out feeling as though I can win each event. I want people to look to see my name and look at me as a contender each week.”

While talking with her, I realize there is a lot to learn from her even though I’ve played a full year longer professionally. She has found a way to not let the outside world distract her from her immediate goals: to be a champion. This is something many young pros can learn from in the social media world of Instagram and Twitter, and potential sponsor endorsements.

In the world of women’s golf, female pros have to jump at every opportunity to get recognition and endorsements. This can lead to losing focus of actually playing good golf to gain exposure. Woods has the opportunity to do something special for women’s golf, even though she says her goal isn’t necessarily to become the face of it. She adds, though, “If people want to look at me as that, that’s an honor. I just don’t want to give myself that title.” Besides her name and talent, she is warm, inviting and open to her fans. Her charisma shines through on and off the course and with her good looks in the mix, the combination will only lead to more people paying attention to women’s golf. Woods seems to understand that women’s golf is special in its own right, which can be more appealing to viewers.

“I would love to see women’s golf get more exposure and more respect for the skills out there,” she said. “I don’t know if people understand what they’re missing out on the LPGA. A lot of these women are married, have children and I think it’s admirable to see a woman out there competing as an athlete. Plus, I’ve heard a lot of men saying they enjoy watching women’s golf more because they can relate to them.”

This is true, considering most people will never swing a club at 125 mph like the professional men.

Woods’ respect for what women do on the golf course will help with her own personal success. She seems willing to learn from those around her and open to seeing golf beyond just being a sport. Not only that, she’s a fighter. After shooting 2-over in the first round at the Australian Open, she fired an impressive 7-under the second round. She stated that since this tournament was right after her first major win as a professional, she felt pulled into several directions.

“I had a lot of stuff going on outside of golf,” said Woods. “I was being pulled in a lot of different directions and it’s hard to separate that. I was a little all over the place the first round. The second round I didn’t feel like I had to force anything and that I was more focused.”

If she continues to stay focused there is no telling what Woods will accomplish. With this in mind she added, “The best piece of advice I’ve been given is to trust who you are on the course and to be confident and true to yourself. Stay a strong individual and don’t let outside influences get you off your path.”

Her path looks like it is on the way golf superstardom.

Make sure to look out for Woods March 20-23 at the LPGA Tour’s JTBC Founders Cup. She will be playing on a sponsor’s exemption, as she does not have full LPGA status — yet. Anya Alvarez has been playing golf since she could walk and enjoys spreading her joy for the game. She is originally from Oklahoma, went to the University of Washington, majored in history and played four years on the golf team. Alvarez found herself wishing for warmer weather and figured Florida might be a good fit. Turns out she really enjoyed the sunshine. She had a brief stint on the reality golf show called “Big Break: Atlantis” and although she didn’t win, she eventually earned her LPGA card. She played other sports growing up, but hated running so stuck to golf.

Related Link: Inside the Ropes with Anya Alvarez