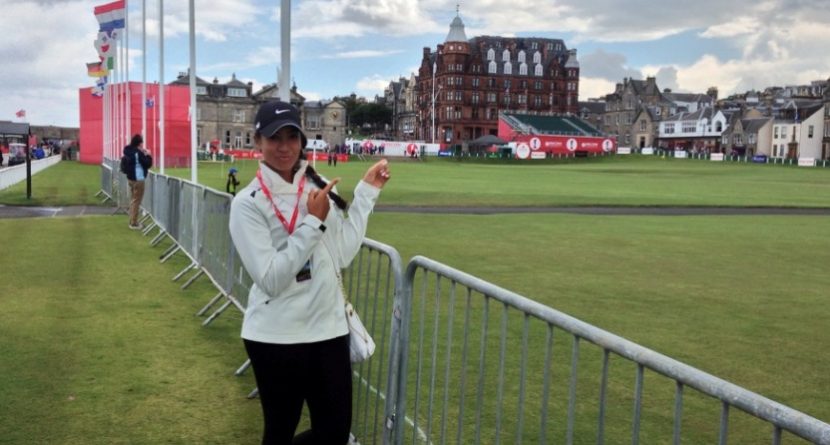 Trekking through Europe is on the bucket list for a lot of young people. It’s the first thing many aim to do upon graduating from college and experiencing their first taste of freedom from the classroom.

That’s sort of what Cheyenne Woods is doing this summer – only she’s also advancing her career, getting paid at various stops along the way, and is able to get on some of the most iconic golf courses in the world. The Back9Network ambassador and niece of Tiger Woods walked the grounds this past weekend at the Home of Golf, the Old Course at St. Andrews. The legendary Scottish course hosted the Women’s British Open, and even though Woods missed out on qualifying for the tournament, the rookie was able to soak in the sights and sounds.

“This was my second time to St. Andrews so it was great getting a chance to see the history there again,” Woods told Back9Network. “It was even more special this time while being there with the ladies British Open. I can’t begin to tell you how hard it was to watch and not be able to play at the Old Course! But it has motivated me for this next week on (the Ladies European Tour) in Prague.”

Following a standout career at Wake Forest University through the spring of 2012, Woods earned her way onto the LET for 2013. She’s competed in nine events thus far, and ranks 51st overall with 20,770 Euros earned (roughly $27,525). Woods is in Prague, Czech Republic, this week for the Honma Pilsen Golf Masters, where she’ll look to secure a fifth top-25 finish this year. She’s coming off a 16th-place tie at the ISPS Handa Ladies European Masters in England, her second-best result of the season after a T-12 in March at the Lalla Meryem Cup in Morocco. Other countries so far on Woods’ summer tour: Spain, Slovakia, The Netherlands, South Africa, Australia and New Zealand.

After Prague, Woods could make business stops this fall in Scotland, Sweden, France, China, India and the UAE, but she’s not likely to hit up each one of those tournaments. Nonetheless, it’s not a bad way to spend your first year of “work.”

Other Hot Links:
– By the Numbers: Tiger’s Big Bridgestone Win
– 5 Things You May Have Missed From The Weekend
– Nike Releases Scripts for 2013 PGA Championship