Cheyenne Woods Not Burdened By Tiger 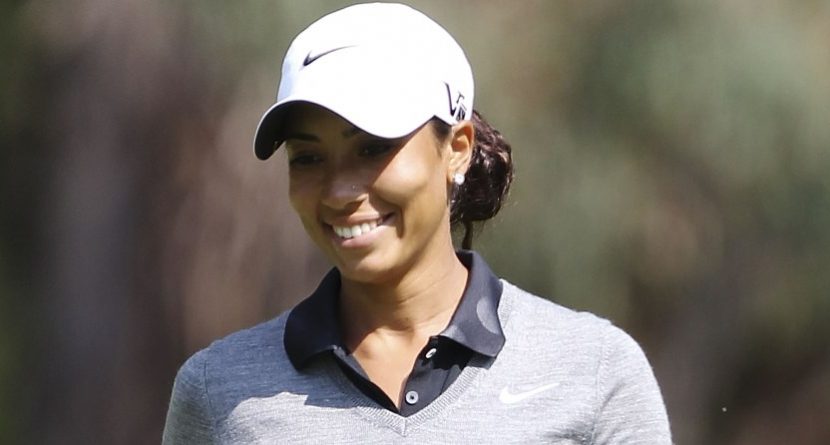 At the time, Cheyenne Woods was too young to grasp the magnitude of her uncle’s impact. But as a first grader growing up in Phoenix, she was well aware of Uncle Tiger’s fame.

“I knew he was famous in first grade,” Cheyenne says. “Every year in elementary school, the first day of school, I would go in and tell my teacher who my uncle was because I was so excited that he was on TV all the time and he was this huge champion. So I knew by first grade – I was maybe six or seven – that he was a megastar. It was cool for me.”

You might assume it’s not so cool anymore, as she’s now 23 and seeking a golf career of her own. When you play the game of golf with a surname of Woods, you tend to attract a little more attention, which can, in turn, bring on a lot more pressure.

The 23-year-old Cheyenne is the biggest name in the field this week at Stage 3 of LPGA Qualifying School, a five-round tournament taking place at the LPGA International Golf Club in Daytona Beach, Fla. She seeks to finish in the top 20, which would grant her full-member status on the LPGA Tour. But to Cheyenne, her family name is a blessing, not a curse. It’s a benefit, not a burden. As such, she calmly and politely answers all the inevitable questions she gets about her uncle.

If you seek advice about golf, do you talk to him?

“Yeah, definitely,” Cheyenne says. “If I ever need advice, he’s always open to give that to me. He’s the only person in my family that plays golf. My mom, my dad – they don’t play golf. None of my other family members play golf. And he’s been where I am now, so he’s one of the only people I could go to for advice like that. But he’s definitely open to that and it’s always great to have that as a resource and an outlet.”

Do you talk to him before big events like this?

“I think he really just wants me to just focus on what I need to focus on and do my own thing. It is a really stressful week and I’m sure he knows that already. He didn’t have to go through Q School, but just being a professional golfer, you know these big events do carry a lot of stress. But you want to take it as easy as you can and just focus on what you need to. So he kind of lets me do my own thing. He congratulated me on making it through Stage 2, so it’s always good to have his support, but it really is just all me,” Cheyenne says.

The credit for getting her into the game is all Earl Woods Sr. That was Cheyenne’s grandfather and Tiger’s father, who introduced Tiger to golf. Cheyenne’s father, Earl Jr., is Tiger’s half-brother. Cheyenne first showed an interest in golf at age 3, which was enough for Earl Sr. to begin passing on his knowledge. When she began entering tournaments, he funded the expenses. When she showed some promise, he hired a coach for her in Phoenix. Earl Sr. passed away in 2006, when Cheyenne was 15.

But the lessons he taught were there when she won two Arizona 5A State Championships for Xavier Prep in Phoenix, when she earned two-time All-American status in college at Wake Forest, and when she played her first professional golf season this past year, primarily on the European Tour.

For golf advice now, Cheyenne turns to Tiger, her idol all along.

“I always watched him play golf,” she says. “I had his posters on my wall, so he was definitely the one that I looked up to.”

Before long, she may be the one featured on posters hanging on young dreamers’ walls.