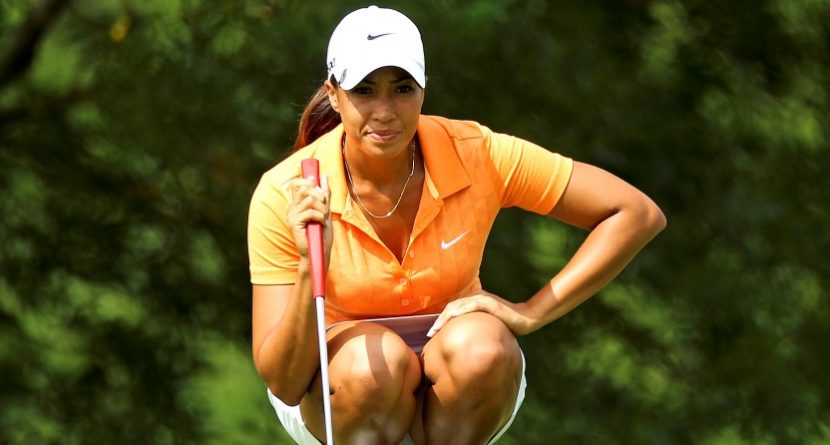 Cheyenne Woods knows the courses at the LPGA International Golf Club in Daytona Beach, Fla. She competed there last year in Stage 1 of LPGA Qualifying School, from which she did not advance.

And she returned two weeks ago for four days to get another look and play a few practice rounds. So she knows what to expect from the track when she tees off Wednesday at 9:50 a.m. ET for the first of five rounds that make up the final stage of 2013 Q-School.

“A lot of it for me is mental,” said the 23-year-old niece of Tiger Woods and a Back9Network ambassador. “Just mentally know that I will be in the top 20. That’s my mentality – going in I know that that’s my spot and I’m going to play my own game and earn my way there.” After navigating through the first two stages, Cheyenne Woods is one of 153 women descending upon Daytona this week and harboring hopes of leaving with one of 20 coveted LPGA Tour cards. Those 20 golfers will obtain full tour status; the next 25 players will get conditional status, which means they can enter LPGA events. But the full-status members have top priority.

Woods plans on being one of those 20 women. The LPGA Tour is a goal she’s aimed for since middle school, when she began to recognize her burgeoning talent. Since high school at Xavier Prep in Phoenix, where she claimed back-to-back Arizona 5A State Championships. Since college at Wake Forest, where she was a two-time All-American and recorded the lowest career scoring average in school history.

By virtue of making it through the first two stages of Q-School, Woods is guaranteed a spot on the Symetra Tour, the LPGA’s developmental tour. And she also has a place on the Ladies’ European Tour, which she played as a full-status member in 2013, her first professional season.

But the LPGA Tour is the highest level, and thus, the ultimate goal. “I was definitely very disappointed not making it through LPGA Q-School (in 2012), but I think it worked out for the best,” Woods says. “I was able to go to Europe; I played a full season there. It was my first time really traveling, first time playing a full professional season, so I definitely learned a lot traveling week to week, learning how to manage your practice schedule. And then also going from country to country was a whole different world for me. You had to adjust to the language, the culture, the food, the time differences.

“So I learned a lot this past year and I think that it really helped me prepare for Q-School. The first time I went to Q-School I didn’t make it through first stage (she missed the cut with a 7-over-par score through two rounds). Now I’m making it here to the final stage. So my game has definitely gotten better, and I feel like mentally and physically my golf game is in a whole different place.”

“I have those two tours that I can always fall back on,” Woods continues, “but this one week is really just focused on LPGA and getting as much status as I can.”

For help, she can turn to her uncle, who is always open to dole out advice to Cheyenne. However, he knows how much pressure comes with a big-time golf tournament.

“I think he really just wants me to just focus on what I need to focus on and do my own thing,” Cheyenne says. “It is a really stressful week and I’m sure he knows that already; he didn’t have to go through Q-School, but just being a professional golfer, you know these big events do carry a lot of stress.

“You want to take it as easy as you can and just focus on what you need to. So he kind of lets me do my own thing. He congratulated me on making it through Stage 2, so it’s always good to have his support. But it really is just all me.”