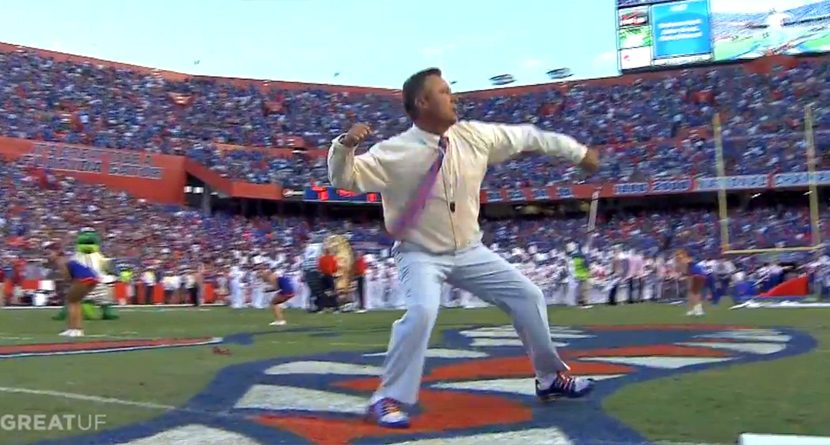 Chris DiMarco has won three times on the PGA Tour, would have won two majors in the mid-2000s if it weren’t for Tiger Woods, and sank the clinching putt for the U.S. at the 2005 Presidents Cup. But he knew Saturday night at the University of Florida football game would be “one of the best” moments of his life before it even happened.

The UF Hall of Famer performed as “Mr. Two Bits” prior to No. 18 Florida’s 30-10 victory over Arkansas. That meant he ran onto the field at Ben Hill Griffin Stadium sporting a yellow shirt, seersucker blue slacks and an orange and blue tie – just like the real Mr. Two Bits did.

Thanks to The University of Florida for giving me the honor of being Mr. 2 bits. Very grateful. #GoGators

BTW the shirt under my shirt said “Thank You George”. George Edmonston was Mr. 2 bits for over 50 years. It was a tribute to him.

Some history: George Edmondson began his “2 Bits” cheer in the stands before a 1949 game. Those around him enjoyed it so much they urged him to do it at every game. Then he began moving around the stadium to lead fans in the chant. Eventually, UF invited him onto the field for a pre-game cheer in front of the entire stadium.

His performance began as he jogged onto the field blowing a whistle and holding a “2 Bits” sign. Once the fans became quiet, he’d point to the crowd, which began shouting, “Two Bits! Four Bits! Six Bits! A Dollar! All for the Gators Stand up and holler!” (A bit was an eighth of a dollar, so eight equaled $1.)

However, Edmondson retired from the popular gig in 2008. Thinking his school needed to regain some its storied tradition, head football coach Will Muschamp decided to bring back the stunt this season. So he’s been lining up Gator celebrities to do the honors.

Former Gators running back Errict Rhett performed the cheer for the first game:

DiMarco, a three-time All-American golfer at UF, was the third.