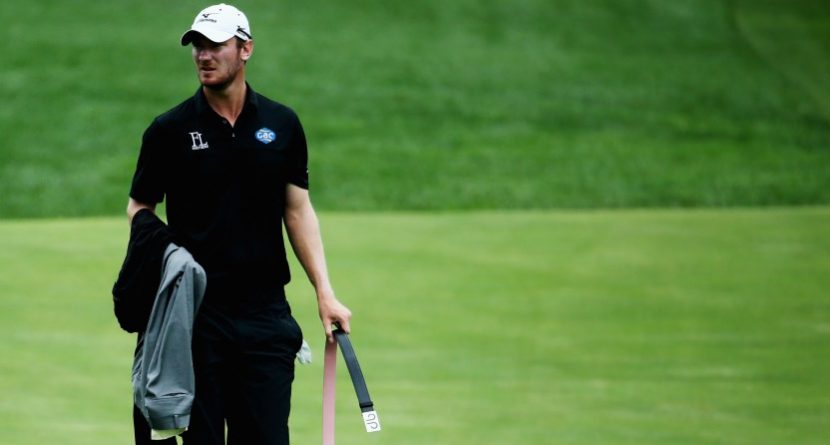 Some well-known names dotted the top of the PGA Championship leaderboard Thursday after the first round of play at Valhalla: Lee Westwood, Jim Furyk, Henrik Stenson, Rory McIlroy. Then there were some not so familiar guys: Kevin Chappell, Ryan Palmer, Edoardo Molinari, Chris Wood.

Of them all, best round of the day goes to Wood. Without question. And not just because he played a bogey-free round for a 5-under 66, his best opening round ever at a major.

He did so in four different pairs of pants. Because he split the seam on his original pair. On his second hole (the 11th).

No matter. The Englishman putted out for par, teed off with his bum facing the crowd on No. 12, then ducked into a port-o-potty and slipped on some rain pants from his playing partner, Johan Kok. Problem was, Wood is 6-foot-6 and Kok is nowhere close. So on the 13th hole, Wood put on another pair of borrowed rain pants.

Wood made par on Nos. 11, 12 and 13 (his second, third and fourth holes of the day), then impressively carded a birdie 2 on No. 14. It wasn’t until No. 17 that he got another pair of his own pants after his manager scurried back to their hotel.

So by the time Wood made the turn, he was back in his own slacks and 2-under par. He then carded birdies at Nos. 2, 5 and 7. Five birdies, four pairs of pants, one remarkable round.

What do you do when your reading a putt 2nd hole of a tournament with 30,000 people around and this happens? #onlyme pic.twitter.com/tmVJgc7rFF

And he came better prepared Friday:

As you can see, his slacks were gray on the 12th tee:

Then black on the 13th green:

And white in the ninth fairway (his final hole of the round):