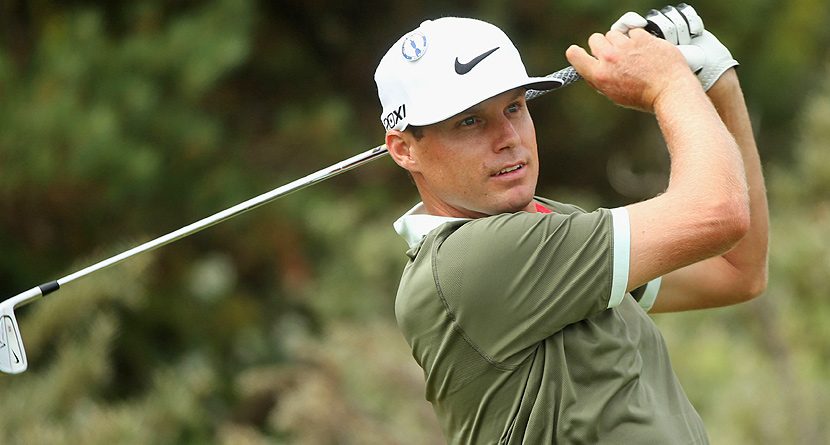 **Notes: Gamers, time to pay attention. This is the first time that Kuala Lumpur Golf & Country Club is being used for THIS event. There is no “horse-for-course” information based on THIS event. Please be aware of this and keep reading for more information.

Notes II: There are only 78 players in the field and they will all play 72 holes of stroke play.

After winning 31 of 40 tournaments in 2013, the USA is now two-for-two in 2013-14 as American Webb Simpson joins last week’s winner American Jimmy Walker in the winner’s circle.

There were 12, first-time winners in the 2013 season and just six players with multiple victories (Woods, Mickelson, Kuchar, Snedeker, Scott and Stenson). In 2013-14, we now have a first-timer and a proven “veteran” through two events.

Now is where things get tricky. This course has NEVER hosted the CIMB Classic so please throw out the “course history” because there isn’t any. If you are looking for horses-for-courses, as I do, you’ll need to check the history from the Maybank Malaysian Open that were played on this course from 2010 through 2012. After the 2006 tournament “every blade of grass” was changed on this course according to europeantour.com so any data before then is irrelevant to me.

So, now that we’ve established this fact, let’s take a look at the winners and their scores at KLGCC.

Previous champions on this course include:

As the TOUR moves to the Far East for the first of two events, gamers start out struggling for information about what’s in front of them. I enjoy events like this because it makes me focus on the better players and why they should win. This week, with four par-fives in play, I’m looking at players who dominate with birdies and eagles. Also, with the course playing not even 7,000 yards, the long hitter should have the advantage off the tee. The winning score has decreased every year but one since 2010 and I would suggest that some of the heavy hitters are NOT traveling halfway across the world to hack balls out of the rough and make pars. These combinations of factors point me in the direction of a big-hitting, and perhaps young, American. That’s hardly shocking but I’m also looking at value in players who have played and have had successes on this course as well.

Phil Mickelson: He’s first in birdie average, par breakers, par 3 birdie or better leaders, birdie or better conversion percentage and he’s 11th in total putting. He’s the best player in the field and now gamers wait for him to play like it this week. With four par fives in play, Mickelson should be licking his chops and adding to his already large bank account.

Sergio Garcia: Gamers hope his excellent finish to the FedExCup Playoffs (T4, T18 and T9 to close) continues this week in the Far East. The way Garcia putted last season gives me no reason to believe he can’t be there in the end of a shootout on Sunday. He devours par fours and fives and finished eighth in strokes gained-putting in 2013. He’s travelled the world and his game follows him.

Keegan Bradley: He finished outside the top 16 exactly once in his last seven events of 2013 and there is nothing in his game that points to a letdown as 2013-14 gets going. He kills it off the tee, makes shedloads of birds and destroys par fives. He finished fourth in the all-around. The only thing missing from his calendar 2013 so far is a W.

Hideki Matsuyama: His WD last week allowed him a week to catch his breath and get healthy so I expect big things from the young Japanese lad this week again. He’ll have quite a following as well this week as he returns to the part of the world where he made his name and has racked up wins.

Jimmy Walker: I started last year in love with Jimmy Walker and there has been NOTHING so far in 2013-14 to stop this affair. He backed up his win at the Frys.com with 64-67 on the weekend (T12) at the Shriners so he’s not complacent on where he is. DYNOMITE! This is not his first trip to the Far East as he competed in this event in 2010 and 2011 so he’ll be here to win not to take pictures. He also makes tons of birdies and can get the putter going.

Nick Watney: After three finishes in the top 14 in the FedExCup Playoffs, Watney knocked the rust off last week in Las Vegas to finish T48. The Vegas resident did find a couple of 66s but sadly he paired those with a pair of 73s and didn’t contend. Watney returns to a part of the world which saw him card 65-65-61 at this EVENT (not course, mind) last season en route to victory so his confidence should be flying. The way he strikes the golf ball makes him a contender most times he tees it up.

Bill Haas: He hit the top 25 in 16 of 19 made cuts last year. His worst finishes were T28, T33 and T43. He also had a TOUR-leading nine top 10s. If you need more convincing, please remember he shreds par fours and holds his own on par fives. He’s another ball striker who just hits too many greens and fairways to omit on a short-ish course.

Ernie Els: The Big Easy just added another year to his belt but his game is aging more like fine wine. In his last two events worldwide, Els finished T17 at the Alfred Dunhill Links Championship on the final weekend of September and was T3 last week in Macau. Each tournament included a round of 65 or better so Els should be ready to fire again this week. Plus, I like the fact that he’s been over there for a few weeks playing and checking on his new course design.

Jeff Overton: Sometimes I throw a flier in this category and the reason Overton is labeled a flier this week is not because of his play, but rather his late commitment to the event. Jason Kokrak WD late last week and Overton took his spot. In his first two events of the season, Overton has opened with bogey-free 64 and 63 and finished T16 and T9. He could have simply said, “No thanks” and stayed home but I like the fact that he’s getting on a plane for 24 hours to get after it. These guys blow hot and cold and I’ll gladly jump on a guy who’s chasing the hot streak.

Charley Hoffman: He opened this season with solo fourth on a course he’s played plenty of times in Las Vegas but he still played it well. I’ll pay attention to any 64 on Sunday and that’s what Hoffman posted. I like Hoffman this week as well because he rolls in plenty of birdies, mashes par fives and his birdie or better conversion percentage was eighth on TOUR last year. Heck, he was even eighth in par breakers and I know you guys love you some par breakers!

David Lynn: By far the funniest/dirties player on Twitter, Lynn also has been laughing all the way to the bank after his win in Portugal two weeks ago. He fired 65-65 to open and closed with an emphatic 63 to raise the trophy. Yowsa. He also enjoys playing on paspalum surfaces as evidenced by his solo second behind Rory McIlroy at Kiawah Island in 2012. His premium short game travels the globe and that’s where he makes his money. Short course this week can’t possibly hurt either!

Roberto Castro: The youngster from Georgia Tech steamrolled July, August and September to almost treble his winnings from 2012. In the biggest events of the summer, Castro was T12 at the PGA, T9 at the DBC, T15 at the BMW and T9 at The TOUR Championship. Splitting fairways and racking up GIR is the key to his success and this led to domination on par fives and boatloads of birdies. His confidence is sky high and I would look to another step up in 2013-14.

Rickie Fowler: In 18 weekends in 2013, Fowler finished T39 or better in 16 of them. The reason behind his success was his putting improved from 111th to 13th. Conversely, his ball striking went from 48th to 117th. Weird, eh? He won the 2011 Kolon Korea Open for his first professional title and was a T5 at CIMB in 2010 so he’s quite comfortable playing in this part of the world.

Brendon de Jonge: This is the PERFECT STORM for de Jonge. Every gamer will be down on him after his 74-70 MC last week in Las Vegas after he was second there last year. I think, myself included, forgot how important it was to him to play in the Ryder Cup and he might have needed one event to get his sea legs back. I would be surprised if he didn’t fire this week and not make tons of birdies. He’s been playing too well for too long to foresee a slump starting now.

Charles Howell III: He’s begins every season on the good foot and this year is no different as he’s posted seven of eight rounds at 70 or better, including 65 to close last Sunday in Las Vegas. Here’s another player who can make birdies with the best of ‘em and his short game will keep him in most tournaments.

Matt Jones: His 2013 season was his best as he finished in the top 30 in scoring average and had his ways with par fours and fives. He was also in the top 30 in ball-striking while finishing 8th in scrambling. He now has four top 10s in his last eight events so there’s plenty to like here.

Ryan Moore: He’s now belted out nine cuts on the trot including finishes of T11 (BMW) and T9 (Shriners) in his last two events. He’ll keep the ball in the fairway and roll in the putts. He’s hot. Good enough for me!

Gary Woodland: After letting me (and others, I know) down at the season-opener at CordeValle, Woodland should come good this week. He’s only been cut ONCE since late March and that was last time out at the Frys.com. He makes tons of cuts and tons of birdies and I like that combo! Plus, he won’t have any problem overpowering this course.

Sang-Moon Bae: He won his last time out at the Shinhan Donghae Open in Korea. His best finish on TOUR since his win at HPBNC in mid-May was T31. Winning golf is winning golf.

Anirban Lahri: I’ll take a look at anyone who finishes the previous weekend with 62 on Sunday for solo second. The bad news is he’s only made one weekend of four at this course and only has one round in the 60s. You want a longshot? Here’s your winner!

The column was taken over and thrashed by the kid from Texas last year. Out of respect, I’m not changing the title of it for 2013-14. It will remind me just how good Spieth was in the last three months of the season. This year, we’ll still identify an up-and-coming player and/or rookie that fantasy players should have on their radar.

I’m off to another AWFUL start.

Frys.com: Gary Woodland, MC. Well, at least I don’t have to worry about when I’m using GARY WOODLAND again!
SHFC Open: Hideki Matsuyama. Time to break through, son. Matsuyama WD with injury so he was replaced withNick Watney. He finished T48.
CIMB Classic: Let’s try this again: Hideki Matsuyama. There’s no cut. This pleases me.

Fantasy Golf columnist Mike Glasscott joined Rotoworld in 2012. He can be contacted via email at RotoworldGlass@gmail.com or on Twitter. Email :Mike Glasscott