Colonel Jason Dufner Tees Off From Top of Churchill Downs 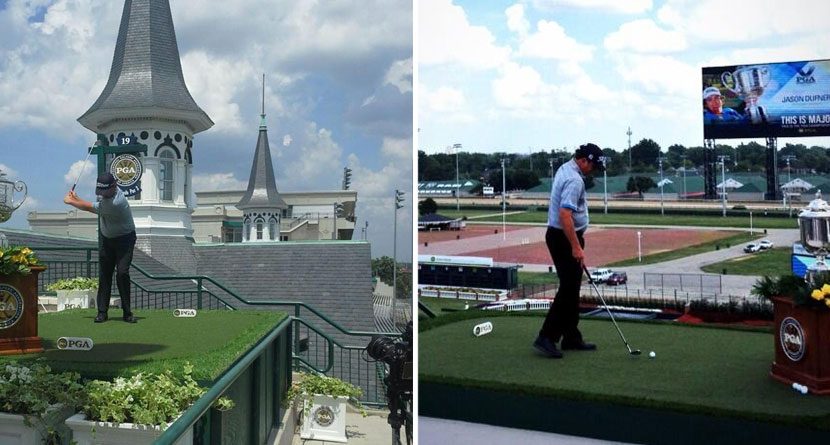 Jason Dufner has been awful busy promoting the PGA Championship lately. Whether he’s baaa-ing like a sheep or hitting golf balls in Miller Park with Kyle Lohse, Duf has been a busy man.

In his latest adventure, Dufner paid Churchill Downs a visit on Wednesday for the 2014 PGA Championship media day, but not on a horse (sadly). Instead, he brought his golf clubs.

Dufner went up to the Twin Spires at Churchill Downs and started taking shots, hoping to hit the winners circle below. From the “tee box” on the roof to the flag in the winners circle, it’s 102 yards and four stories high, a distance he should be plenty used to.

According to PGA of America’s Julius Mason, it took Duf Daddy three tries to hit the winners circle. And only two of his five shots hit the green. I must say, I expected better from the 2013 PGA Championship winner.

Dufner was also joined (and out played?) by a few gentlemen who are likely more familiar with Churchill Downs. Jockeys Corey Lanerie and Robby Albarado took a few swings, nearly hitting the hole, putting their shots closer than Dufner’s.

Jockeys @coreylanerie and Robby Albarado were up first and they delivered! Almost hitting the hole! pic.twitter.com/4RTpkyHuhQ

To top off an eventful day, Dufner was named a Kentucky Colonel, because why not.

The 2014 PGA Championship will be held at Valhalla Golf Club in Louisville, Ky., where Colonel Dufner will look to defend his title from a year ago.