Column: You’re Welcome For Tiger Not Being Disqualified 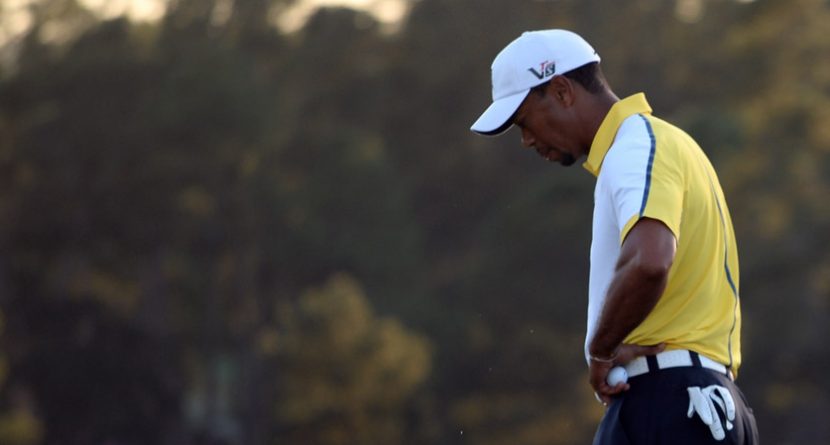 I may have had a small hand in Tiger Woods not being disqualified at the Masters on Saturday. And I’m kind of sorry about it.

A couple of years ago in 2011, I was up late one night watching the Hyundai Tournament of Champions. Camilo Villegas was hitting a pitch shot at the 15th hole. He didn’t hit it far enough, and the ball began coming back toward him. Seeing a massive piece of turf from a divot in front of him, Villegas thought to move it, thinking it would be the right thing to do to allow the ball to roll out as much as it naturally should.

The problem was that broke the Rules of Golf.

I didn’t really remember the shot, however, until fellow writer Dave Andrews contacted me, suggesting Camilo had broken Rule 24-1: “When a ball is in motion, a loose impediment that might influence the movement of the ball must not be removed.”

Well, I went to my DVR. Dave was right. Camilo was wrong.

Concerned, I emailed PGA Tour rules official John Bush, primarily because Dave couldn’t find the right person to call or email to deliver this news with urgency. By the time the Tour saw it, it was too late. Villegas had signed for his score already. They had no choice but to disqualify Villegas for not applying the penalty that comes with breaking Rule 24-1 and signing for an incorrect score.

That incident, combined with another facing now Back9Network ambassador Padraig Harrington just a few weeks later at the European Tour’s Abu Dhabi HSBC Championship, resulted in a Decision from the game’s rulemaking bodies that would exonerate a player from disqualification if they could not have been aware of breaking a rule without modern technology, like video cameras. Going forward, the player would have a penalty retroactively applied, but they would not be disqualified.

Enter Tiger, who was assessed a two-shot penalty on Saturday morning for taking an improper drop at the 15th on Friday. Without the Decision (not the LeBron kind), Woods would have been done. Instead, he plays on for a fifth green jacket.

However, I still feel bad for getting Villegas axed in 2011.