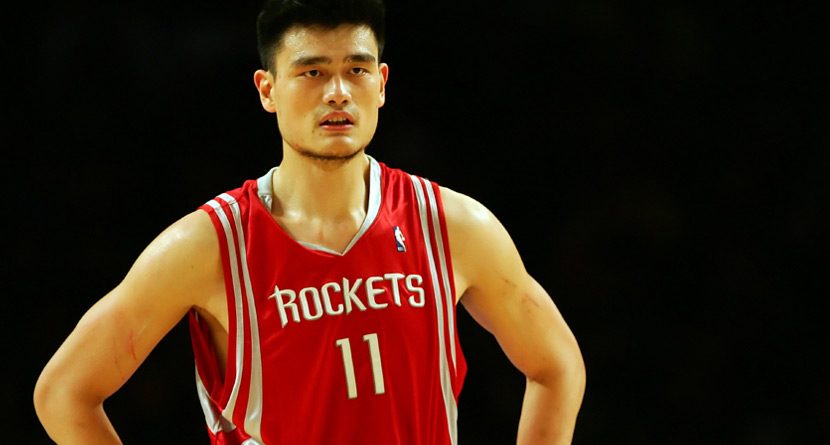 Ultimately, Guan could shadow over Yao — at least in terms of his impact on sports in their native China.

The 14-year-old Guan made the cut at the Masters on Friday, becoming first the youngest contestant ever by virtue of winning the 2012 Asia-Pacific Amateur Championship, then the youngest to play the weekend after playing alongside the previous record-holder, Matteo Manassero.

Three other Chinese players had made a Masters cut before him, though Guan is the first in 26 years. Other countrymen have finished higher in majors, namely Liang Wen-Chong and his T-8 at the 2010 PGA Championship. But those players seemingly didn’t move the needle in terms of Chinese golf. Guan just might.

When Yao made his NBA debut, the pride in China was palpable. National journalists chronicled his every move in this country. Millions tuned in back at home to watch him play — some 30 million on average, enough to make the NBA the most popular sports league in the country. Yao received more votes to play in the All-Star Game than any in history. Now that Yao has retired, his lasting impact on the game in China is still to be determined.

The Olympics are three short years away, and golf is returning to the Games in Rio after a century-plus absence. Guan would be 17 by then, but also would need to turn pro to qualify for the Olympic golf tournament. Brazil might not be in his long-term plan, but the 2020 Games might be.

Guan won’t be the only prodigy produced by China’s commitment to using the Olympic platform to showcase its immense power in the world. Andy Zhang got into the U.S. Open last year at 14. Ye Wocheng, at a mere 12 years old, recently became the youngest player to qualify for a European Tour event.

The Chinese government is providing the infrastructure for these kids to develop, compete and be molded into top-tier golfers. What a contrast from the Cultural Revolution, when the game was considered too bourgeois.

However, golf takes space to play, unlike basketball, which is as accessible a sport as any. A court is 94 feet by 50 feet. Grab a ball and plant a hoop, then go. While the number of golf courses have conspicuously tripled in recent years, the game is incredibly expensive, and the government must be careful not to endorse such a land-sucking game when it faces issues with overcrowding and worldwide criticism for their attitude toward environmental issues.

What China wants, however, it seemingly gets. It may struggle to find golf space for the masses, but it certainly has the willpower and, now, the inspirational figures needed to plant the flag of the People’s Republic in Golfdom.