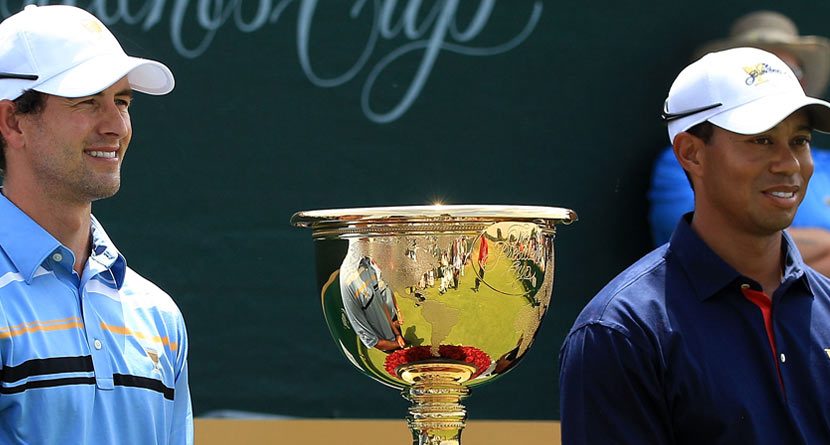 Next on deck: the 2016 Summer Olympics. With the FIFA World Cup now in the rearview mirror, Rio de Janeiro can now solely focus on preparing for the Olympic Games that are slated to commence Aug. 5, 2016.

And golf enthusiasts worldwide are counting down the days – 753 as of this posting – to see their beloved sport get back into the world’s biggest sporting showcase. For the first time since the 1904 St. Louis Games, golf will crown men’s and women’s Olympic champions.

What will that event look like? Here’s a very early preview:

The Field
With assistance from the men’s and women’s official world golf rankings, 60 men and 60 women will be chosen for the Rio Olympic golf tournament. Every player in the top 15 of the rankings (as of July 11, 2016) will earn an Olympic berth, up to a maximum of four players from one country. From there, a maximum of two players per country are eligible as long as their country doesn’t already have two or more athletes in the top 15. The host country, Brazil, is guaranteed a berth, and each of the five Olympic continents (Americas, Africa, Asia, Australia/Oceania and Europe) will be represented. As for the women, the American team would be Stacy Lewis (1), Lexi Thompson (5), Michelle Wie (6) and Christie Kerr (11). Paula Creamer (12), Angela Stanford (13) and Lizette Salas (14) would be left home because of country quota limits. South Korea is the only other nation with multiple players in the top 15. Its team would consist of Inbee Park (3), So Yeon Ryu (9) and Amy Yang (15). The Format
The Olympic tournament will basically be your typical 72-hole individual stroke play competition. There will be no cut – all players will play all four rounds – and the athlete with the lowest score wins the gold medal, followed by the silver and bronze medalists. Ties will be broken with a three-hole playoff.

The men’s event will take place the first week of the Olympics, with the women’s tournament during the second week.

The Course
Golf’s Olympic return is to be staged at the brand-new Reserva Marapendi Golf Course in Rio’s Barra da Tijuca neighborhood, where most of the Olympic venues will be located. Designed by noted course architect Gil Hanse, the Rio course is far from finished and will be cutting it close in terms of being ready.

“Our plan is to have all of the grassing completed by late October, early November of this year,” International Golf Federation vice president Ty Votaw said this week.

Other than its close proximity to the Atlantic Ocean and other venues, not much is known about the course just yet. After the Games, it will serve as the only 18-hole public golf course in Rio de Janeiro, a golf academy for instruction and education, and receive funding from the Brazilian Olympic Committee for junior golf initiatives around the country. Olympic History
Golf was dropped off the Olympic program following its appearance in the 1900 and 1904 Games, but reinstated by the International Olympic Committee in 2009. Americans Charles Sands and Margaret Abbott won the gold medals at the 1900 Paris Games, followed by Canada’s George Lyon in 1904, when the women’s event was dropped in favor of a men’s team event. The U.S. was guaranteed to sweep the team medals, as it sent 74 of the 77 total golfers in 1904; Canada had the other three. Among the 22 men and women in 1900 were nine from France, eight from the U.S., four from Great Britain, and one from Greece.