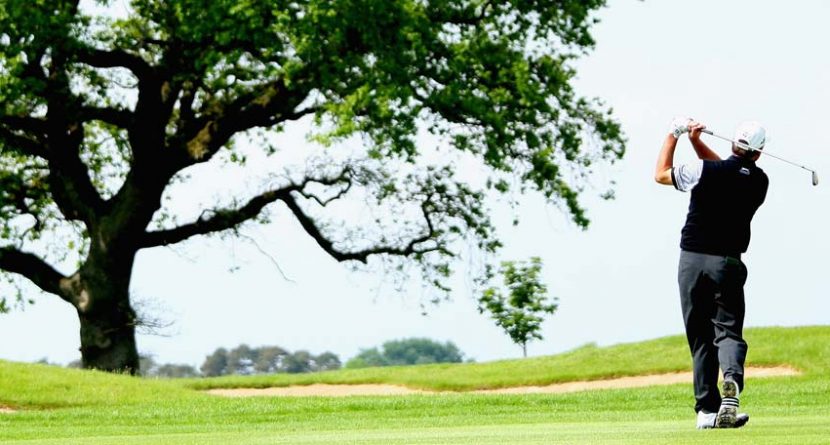 “My biggest problem,” a player once told me, “is separating myself from what’s going on. Sometimes I can’t see the woods for the trees.”

It’s a sentiment one-time European Ryder Cup hero Peter Baker has been thinking a lot about in the first weeks of 2013.

Baker, 47, has taken on a new role as golf manager at the Champions of Golf management group, and a key duty will be to stand aside and see what the golfer can’t.

“It’s all about my experience,” he told Back9Nework, “it’s about looking back and knowing what I did right – and what I did wrong too, of course!”

“On tour it can be easy to lose track for longer periods than you realise. Before you know it four, five weeks have slipped by.” It’s that woods and trees thing again. “Exactly! Having someone alongside who can look at things a bit more clearly. I’ve made mistakes and hopefully learned from them. I know golfers perform at their best when they don’t have other worries.”

Golfers also like to know that the person offering them advice knows what they are on about, and I suggest that Baker has just about done it all in the game of golf.

“You could say that!” he laughs. “In fact I might be unique if you think about it.”

A reminder of his career confirms that he did almost everything and bought the T-shirt.

He was an amateur star (he played the Walker Cup in 1985), a 20-year-old winner on the European Tour (he eagled the 18th hole twice in a day to defeat Nick Faldo in a playoff), he had “second album” syndrome (having been 12th in the 1988 rankings he failed to make the top 100 in 1989 or 1990), he bounced back to became a double-winner in 1993, he was a Ryder Cup star the same year (three points from four matches on debut), was then a solid tour pro (never outside the top 100 in the Order of Merit until 2002), was a winning vice-captain in the 2006 Ryder Cup and finally found himself trying to reignite the glory days from the Challenge Tour.

He’s seen the highs and the lows; he’s experienced the joys and the frustrations. Now he’s giving something back and it’s a role he is clearly relishing.

Champions currently have four golfers on the European Tour and chatting to Baker about them offers insight into the challenges of being a touring professional.

“I’ve not had the same conversation twice,” Baker says, reflecting the fact that each is at a different stage of his career.

“You look at Graeme Storm and you see a really reliable swing which is why he’s been around so long.” Long enough to be 76th in the career money list no less. “But what excites him, and what he wants more of, is getting in contention. He’s experienced now so has a feel for scheduling, but he opted to miss Dubai this year. He likes it there, even likes the course, but he’s just never played well there. We talked about it and having a voice there to back-up your ideas can make you more comfortable with the decision which in itself makes you more confident.”

Promising young Scotsman Scott Jamieson is already a maiden winner this season, and Baker is excited by a distinct quality he possesses.

“He’s one of those players you see and think, ‘You know that part of his game? I’d have loved that.’ With Scott it’s his emotions. He’s very mature with a great demeanour. The value of that sort of thing is huge on tour.”

The shape of Baker’s early years reflects to some degree the experience of Jamieson’s fellow Scot Marc Warren who quickly made his mark on tour before experiencing a downturn. The last two years have seen him creep back up the rankings.

“When he contends he doesn’t shy away,” says Baker. “The question with Marc is getting him into contention more often. I’m very excited because there is so much potential with Marc.”

The final player is young Englishman Matthew Southgate. “The thing about Matt is this,” says Baker, “he just loves golf. Really. It’s so refreshing!”

Unlike the other three, Southgate is still learning the ropes on tour.

“The way he got his card speaks volumes about him. He got a late call-up to Q School and took it in style with a top ten. I like that sort of thing – he proved himself. I remember what it’s like and I’m really keen for him to get lots of tournament golf under his belt because that’s how you feel more comfortable.”

It will not always be an ego-boost though. Baker knows that. “The players expect honesty. That I tell them you’re good at X, but Y needs a bit of work.”

The world has changed since Baker joined the European Tour in 1987. Then it was possible to play most of it from the back of a car. Next month players will embark on a three week stretch including India, Malaysia and Morocco that might cost $12,000. “That’s why I need to help them keep improving, avoiding distractions and keeping it simple,” says Baker. “They can all do it. They’re not any golfers, they’re golfers I believe can go far.”

We end our chat with a story about two talented golfers Baker encountered in his early days – the major winners Sandy Lyle and Ian Woosnam who, like Baker, grew up and learned the game in Shropshire, a small county in England.

“I was actually coached by Alex Lyle,” says Baker, “so when I was thinking of turning pro I managed to get some rounds with Sandy and Woosie. I went away thinking, ‘Wow these guys hits it unbelievable. Is this what all professionals are like?!’ But the funny thing is, when I got on tour I suddenly realised I’d been playing with two of the purest hitters of a golf ball in the world – it just so happened they both lived in Shropshire! So suddenly I looked around me, thought ‘Hang on I’m not that bad’ and wasn’t overwhelmed. In the end it had a positive effect!”

Baker’s new task is to achieve something similar through good advice and guidance.