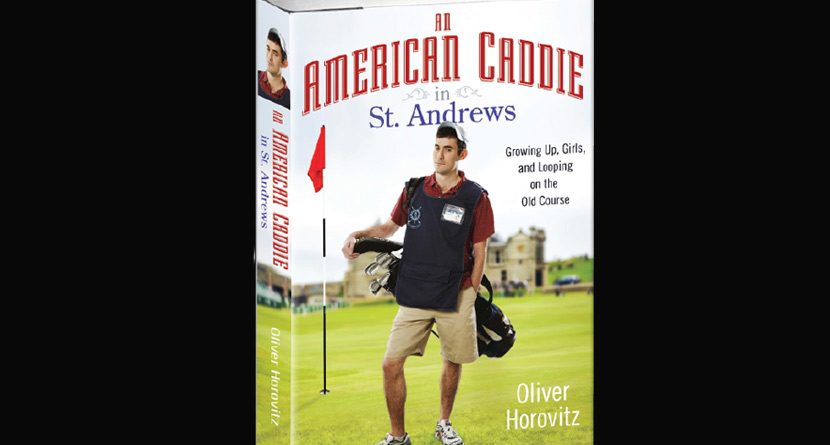 I’m going to be honest – when I first heard about this book I was a bit cautious.

The good news: it was recommended to me by people I trusted.

Oh dear. Want to know the truth? On this side of the pond, that’s kind of like the golfing version of an American asking you how Prince William and Kate are doing. You know, like you actually take afternoon tea with them once a month. At Buckingham Palace.

I’ve read my fair share of these books and they tend to go like this: author is excited to play links golf, author finds out it is very wet, very cold and very windy, author then magically discovers the secret to life. They’re well meant, and I’m no curmudgeon – I’m really pleased the author had a great time. But they tend to be a bit schmaltzy for my European taste. Not schmaltzy, that’s not quite the word. Saccharin is though.

But I got Oliver Horowitz so wrong. Truly. My doubts were completely unfounded. “An American Caddie in St Andrews” is a good read. It really is.

Ollie – I think of him as Ollie now, by the way, like he’s my friend; I think that tells you a lot about the book – Ollie does come to Scotland because of golf, he does immerse himself in the game, and he does leave better for the experience (although it takes him a long time to leave, he keeps coming back for more). But he is also charming, light-hearted and – crucially – he doesn’t sugar-coat the experience. Sometimes it sucks and he tells you so.

Let’s start at the beginning though: Ollie is a smarty pants. He has a place at Harvard but he has to wait 12 months to take it, so he flies to St. Andrews for a gap year. He loves it there, and come the end of the academic year, he doesn’t want to leave so he signs up for a summer of caddying. He’s done it before at his home course, he’s a good golfer (part of the university team no less) and he’s played the town’s courses all year – how hard can it be?

Very hard is the answer.

Why? Because there are rules (spoken and unspoken), there are traditions (ditto) and there are hard, hard men in the caddie shack who won’t take to youngsters who don’t take the job seriously.

He spends all day, almost every day on the course, caddying 36 holes or boning up on his knowledge of the Old Course bunkers: “The two between six and 13 are the Coffins. The bunker 85 yards short of 14 green is called Hell. The bunkers just left of 14 green are the Graves. There are a lot of death references out here.”

Slowly he comes to terms with the job, and, for the next few summers, he keeps returning because the pull of the old town is too much for him. Harvard is a remarkable place, full of gifted people, exciting opportunities and amazing facilities, but Ollie misses the caddie shack: “I worked alongside sturdy blokes for 16 hours a day who didn’t care what anyone else thought about their life choices, guys who just loved golf and wanted golf to be their lives.”

And with every new summer day spent in that shack he becomes more welcome, even if he does risk the growing acceptance of him by coaching a bunch of rival caddies (they happen to be beautiful girl students and are roundly loathed by the genuine caddies) and then daring to film a documentary project inside the shack.

But he overcomes the problems and has adventures too – hitting on Paula Creamer at the 2007 Ricoh Women’s British Open, looping for Huey Lewis in the Dunhill Links Championship and walking the Old Course with Larry David. (My favourite bit in the book? Larry doesn’t cross, never mind have his picture taken on, the Swilcan Bridge at the final hole. “Nah, I’m good,” he says. “Eh … it’s just a f–king bridge.”)

All of this makes for a good read, but there is something else; an element to the story that takes it beyond a nice yarn about golf – it is the presence in St Andrews of Ollie’s great uncle Ken.

Ken – and his best friend Henry – steal the book. Eighty-something Second World War veterans with a passion for St. Andrews, caravanning and garden shows, they are wonderful characters and Ollie does them proud, recalling how Ken always had a kind word and a rock bun waiting for his greatnephew, and that Henry had an enigmatic desire to confirm that any natural disaster in North America wasn’t unduly affecting Harvard or Ollie’s home city New York.

Next month I make my debut on the Old Course, and I began to fret about the experience. The caddies are brutal about the inadequacies of the golfers, and Ollie quotes Samuel L. Jackson, who said on the Letterman Show: “The only thing I am afraid of in life is my caddie at St Andrews.” Reading this book I knew exactly why.

But then I thought of Ken and his love of St. Andrews, a man and a town whose spirit Ollie has captured so well. A place golfers visit to experience something special. A place where tearful 70-year-old golfers on the first tee cry: “This is the happiest day of my life.”

A town where, as Ollie says, “Everyone in the town plays. Your taxi driver is a three-handicap. The little old lady in Tesco supermarket is a Ladies Putting Club champion. It becomes your life.”

Now? I can’t wait to play there. Even if I suspect the caddies will be chuntering about me in the shack afterwards.

For more information on the book, visit Ollie’s website.