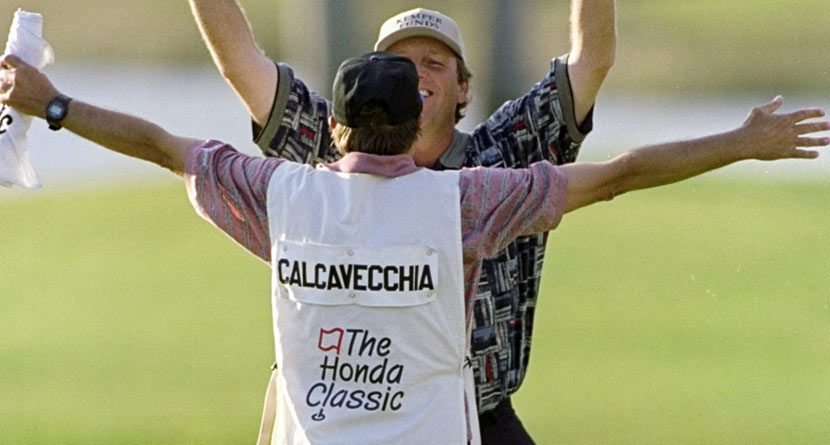 Mark Calcavecchia was 13 years old when his brother took him to the 1974 Jackie Gleason Inverrary (now simply Honda) Classic to watch Lee Trevino, Jack Nicklaus and the veteran Sam Snead.

Walking those fairway, the young Calcavecchia was excited but, crucially, unfulfilled. He wanted to be playing, not watching. “Yeah,” he muttered to himself, “this is what I’m gonna do when I grow up.” Those turning points matter. Most successful sportsmen and women have their own version, a moment they can remember, which motivates them when the going gets tough.

Just eight years later Calcavecchia was as good as his word, making the cut in his Honda Classic debut, but the next few years proved less straightforward. He was finding the professional experience tough and by the time of the 1986 Honda Classic he had no Tour card and growing doubts about his future.

His best friend on Tour was Ken Green, whose caddie (and wife) Shelley had broken her wrist. Green offered Calcavecchia the bib and, although reluctant, the failing tour pro accepted. He didn’t know it, but that one, slightly grudging, decision was the prompt to a massive turnaround in his fortunes.

At first, however, it seemed yet another kick in the teeth. Green shot 78-72 to miss the cut. “He played so bad,” Calcavecchia said. “A couple of times I felt like jerking the club out of his hand and hitting it myself.”

But something special had been set in motion.

We tend to look for the obvious precursors to success – good form, good vibes, good news. Sometimes, though, the mind is triggered in less predictable ways. In Calcavecchia’s case, it was those few days of frustration on the bag.

“Even to this day,” he has said, “people tell me how great it is to see me doing so good out here after being a former caddie. I usually say thanks and don’t bother telling them that I was bored stiff that week with nothing to do.”

It gets stranger though – Green’s bad form had immediate consequences. Not only might it have acted on Calcavecchia consciously and subconsciously, but the missed cut allowed him to play a mini-tour event in Myrtle Beach which he won.

And the craziness was not yet done: excited by the upturn in form Calcavecchia drove through the night to Miami, grabbed 90 minutes sleep, successfully played the Monday qualifier for the Doral Open, opened the event itself with a 65 and finished eighth.

Suddenly, in the space of a week, his fortunes were transformed. Later that season he qualified for the U.S. Open at Shinnecock Hills, equaled the course record with a 65 in the final round and finished 14th. In September his form peaked with victory in the Southwest Golf Classic which earned him a cheque for $72,000 and a guaranteed card until the end of 1988.

When he returned to the 1987 Honda Classic he wasn’t waiting for a friend to toss him a bib, he was desperate for victory. He had started the season with three top three finishes in the MONY Tournament of Champions, the Bob Hope Chrysler Classic and the Phoenix Open and such was the turnaround in his mindset from 12 months previously he said: “Those three thirds actually depressed me. I had found out how hard it is to win out there.”

The 1987 Honda Classic was hosted by TPC Eagle Trace in Coral Springs and perhaps that week Calcavecchia’s mind returned to 1974 because although this time he was the right side of the ropes, there was plenty of support outside them for him.

“A lot of friends were out there,” he said. “People I hadn’t seen for nine or 10 years. It’s something I’d never witnessed before. I didn’t know I had that many friends.”

Going into the final round Calcavecchia trailed Bernhard Langer by two shots, but the German was going through another bout of the yips and completed an unhappy Sunday 75. Calcavecchia’s 70 saw him claim the title.

The importance of the second win was uppermost in his mind.

“One victory might be considered a fluke,” he said. “But when you win twice out here, that means you’re one of the best players in the world. For at least one week anyway.”

As a side note the win had another implication – it provoked the debate about grooves. On one occasion Calcavecchia hit a shot from thick, tangly rough and when it landed with backspin there was widespread astonishment.

Ping’s square grooves were announcing themselves to the world and not everyone liked what they saw. Tom Watson and Jack Nicklaus were leading critics, and Calcavecchia has said people implied his use of the Ping Eye 2 was tantamount to cheating.

But square grooves would become common place and Calcavecchia would prove himself in the long-term – before transferring to the Champions Tour he claimed 13 PGA victories and five overseas titles, one of them the 1989 Open Championship.

And yet he’s probably destined to be remembered for his character rather than his achievements. Golf fans adore his maverick nature. He is also known for enjoying the company of caddies and famously supported his one-time bag carrier Eric Larson, who was jailed for drug trafficking.

His love affair with the Honda Classic continued down the years – he won it again at Heron Bay in 1998 and was twice second. He’s not playing this week which is a pity because one thing you never did at the Honda Classic was rule out the Calc.