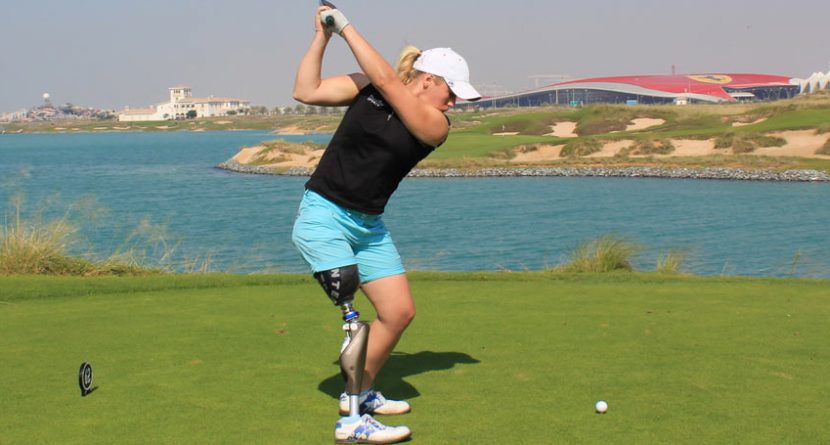 Two years ago this week Caroline was in Christchurch having caddied for her sister Louise who was making her debut in the Ladies European Tour’s New Zealand Open. The day after the tournament ended, the girls were caught up in the earthquake which rocked the city. They narrowly escaped falling buildings and returned home to Sweden to experience the strange high many survivors report of in the aftermath of a brush with death.

But Caroline’s relief was to be short-lived.

“Chondrosarcoma,” she says, “the word that changed my life.”

She had been diagnosed with cancer and amputation of her right leg, just above the knee, was the only option.

“At first I thought this drastic measure would take my life away from me,” explains 24-year-old Caroline, whose future plans had included following her sister on to the LET. “It was a life I loved, but it turned out that I had something greater. They took my leg, but gave me life!”

It’s easy to be suspicious of such positive words, to suspect she is merely adopting a brave face. But meeting her quickly disabuses you of such notions. The first thing which strikes you is her quiet voice and pretty smile. Then you become aware of her intelligence (she predicts and addresses the doubts of others), her honesty (she never shies away from revealing she has dark moments) and her conviction. Take the words she used on her blog to describe the day of the amputation:

“On Thursday morning I went to the hospital. It felt okay, and my gut feeling was calm. I did a little meditation exercise given to me by Lennart which helped me to further appreciate what I had in front of me. I will not delve into it deeper, but I felt such peace before everything. I felt that I could handle this and that everything will be fine. Yes, I felt it 100 percent. I understand that people might perceive me as ‘positive’ or suspect I repress everyday and dare not be sad, but it really is not so.”

Within days of the operation, Caroline was practice putting along the corridors of the hospital, within weeks she was hitting balls on the range, by the end of the year she was playing in disabled (or “handi”) events and last year she also competed on the Swedish professional tour and in an LET pro-am.

Her desire to focus on what she has gained, rather than lost, is inspirational.

“A whole new wonderful world has opened up for me of insights and people,” she says. “It’s been tough, yes. The surgery and the cruel pain have been a struggle. But there have been positives because I dared to see the problems, dared to feel the pain, dared to ask for help. Together we, people, can draw on each other.”

Caroline’s life is full of little tales which reveal her unique approach to life. Early this year, for example, an elderly man approached her in a supermarket and told her how sorry he felt for amputees. She was shocked by his clumsiness and his assumptions.

Caroline has also recently revealed that she was contacted by mystery benefactor who, inspired by her attitude, offered to buy an expensive Genium prosthetic leg. When it was delivered she discovered a note attached.

“I had the opportunity to help you,” it read, “which I felt strongly I should do. I want you to have the chance to achieve your dreams and live your life with as much positive pleasure as before. The chain of love in life is that we help each other and pass it on. I will help you and my wish is that you might have the opportunity to help someone else in the future.”

“There was no name,” says Caroline, “and no date, just those words. A stranger came as an angel, quite unexpectedly, straight down in my life. It is one of the strongest times I have felt so full of love.”

It’s an amazing story with a beautiful sentiment and the new leg has allowed Caroline to continue her golfing progress. In 2013 she aims to finish in the top 50 on the Swedish Tour and return to competition on the American Handi Tour. The competition and spirit she experienced there in 2011 is something she wants a repeat of, particularly a Ryder Cup style match between the USA and Europe.

Those words ring true because Caroline Larsson would grace the Rio 2016 Olympic/Paralympic stage. Time spent with her is never wasted. You feel better about the world and motivated by her courage. The golf world is full of players, caddies and journalists who affect world-weary cynicism like a badge of honour; Caroline Larsson makes a refreshing contrast to all of that.

In addition to continuing her golf (and skiing too – she is competing in a 30 km cross-ski race soon) Caroline has started lecturing to schools, organisations and athletes.

“The lecture is called ‘Outstanding,’” she says. “It is designed to tell my story, but also to inspire people to think differently about their life and discover their own ‘recipe’ to reach their goal.”

Perhaps what most impresses with Caroline is that she is defeating what cancer did to her by refusing to let it change her character, by remaining the quiet, sweet and determined girl she always was.

But she has also gained something, epitomised by one of her favourite phrases: “Fear less – live more.” They are words we should all be inspired by. We should also remember the sentiments of her mystery benefactor – perhaps we, too, should help someone and ask them to pass it on.

You can learn more about Caroline’s story, and follow her journey, on the blog at her website.