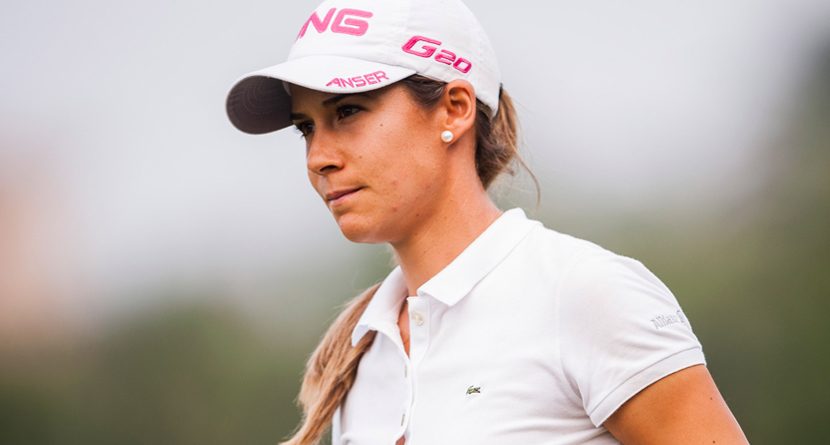 Seve, Ollie, Sergio, Miguel – players who require just one name. More than that – players whose charisma appeals to the fans, whose journey on the golf course the galleries feel a part of. They have something else in common too – they are all Spanish men.

So here’s a question: ‘Where are the golfing senoritas?’

The good news is that things are changing. Say “hola” to Azahara and Carlota.

Ladies Spanish golf has been bubbling away for seven or eight years. The first signs came in the British Ladies Amateur Championship which was won by Belen Mozo in 2006, Carlota Ciganda in 2007 and Azahara Munoz in 2009.

By the end of 2009 Munoz had turned professional in style, claiming victory on debut in the LET’s Madrid Masters. Twelve months later she was the LPGA’s Rookie of the Year and her compatriot Beatriz Recari had become the first Spanish winner on the LPGA since Marta Figueras Dotti in 1994.

In 2011 Munoz not only played in the Solheim Cup, she was an integral part of the team’s success and, in 2012, her game blossomed as she added consistency, broke the world’s top 20 and claimed her maiden LPGA title, the Sybase Match Play Championship.

Meanwhile, back in Europe, Munoz’ close friend Carlota Ciganda was making history, winning twice on her way to claiming not only the LET Rookie of the Year award but the Order of Merit too – the first player to accomplish that feat since Laura Davies in 1985.

If these two close friends have begun to follow in the footsteps of the men in winning trophies, they also have the potential to emulate their close relationship with the fans, because they too have personalities that shine through their golf.

In 25-year-old Munoz’ case it is her serenity and smile which sets her apart – at the Solheim Cup she admitted to nerves and yet approached the first tee every day like the princess in a fairy tale. The crowds went wild.

Ciganda, 22, on the other hand, thrills the galleries with the audacious tenacity of her game. On her professional debut in the Tenerife Match Play in 2011 she was followed by an excited group of Spanish golf journalists. Their enthusiasm drew me in and it took me no time to appreciate their excitement. She attacks the golf course in a way that is rare in ladies golf. The crowds love it.

Ahead of an exciting 2013, which offers the prospect of another Solheim Cup appearance, Back9Network talked to Munoz about the success she and Ciganda have enjoyed, beginning by discussing the fact that they are part of Spain’s wider sporting success as well as a flourishing generation of Spanish lady golfers.

“For sure, the way Spanish sport is going is amazing!” says Munoz. “And it’s definitely a real inspiration to see the greatest perform. Watching the Spanish football team win the World Cup and Rafa Nadal win in tennis, feeling so close and proud of them, it makes you want to get better. And it is changing for us now, people recognize us more and more. That’s great for golf in Spain.”

Their journey to recognition began 14 years ago, when Munoz was 11 and Ciganda 8, playing age group events around the country. “We clicked right from the beginning and became really good friends – she is actually the friend I talk to the most,” says Munoz.

The friendship reaped on-the-course, as well as off-the-course, benefits. “Yeah, we’ve always competed against each other. You always put effort into being the best, but if the people around you are really good you need to work even harder. I think that’s why there are so many good players from our generation in Spain. We all learned from each other and wanted to improve, to make the teams and win tournaments. We also had so much fun together that were always so excited to go to tournaments and practice together.”

Ciganda followed Munoz to Arizona State University where they represented the Sun Devils with both pride and success. The friendship deepened and Munoz’ appreciation of Ciganda’s game, too.

“Carlota is unbelievable. I don’t think I could trust anyone more than I trust her. On the course her strength is how far she hits it, but also her head. She is so calm and super down to earth, which is so important to be successful and handle things the proper way.”

And now they are both successful professionals, both currently in line to make the Solheim Cup team together. They are both sensible enough to deal with one thing at a time, but the rest of us can ponder – Seve and Ollie made one great Spanish-European partnership, Azahara and Carlota might just make another.