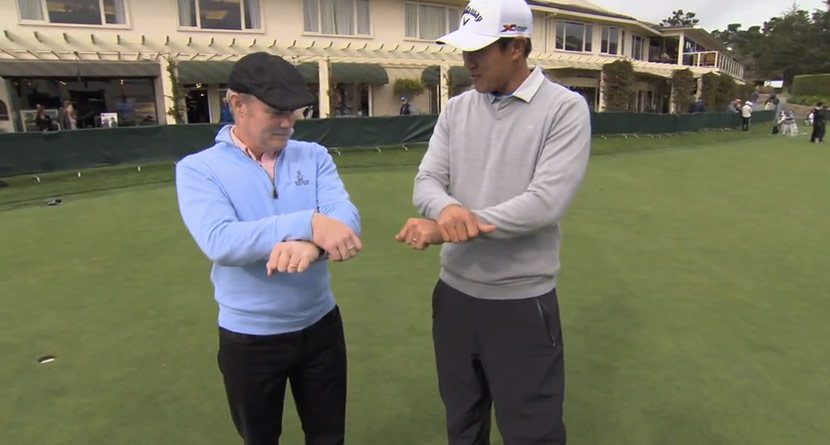 It didn’t have to end this way: Brandt Snedeker clutching the AT&T Pebble Beach Pro-Am trophy, posing for photos—while keeping his feet stationary, no less. There was no music, no laughter, no dancing. James Hahn deserved to be the one standing there, casually swaying from side to side.

When Hahn shared the lead the night before the final round, he could’ve formulated a devilish plan to distract Snedeker: unleash the art of the dance throughout Sunday’s round, therefore shaking this normally unshakable redhead. A dance could be to Hahn what the fist-pump is to Tiger Woods—a show of force and a method of intimidation that would leave other golfers in his wake.

It wouldn’t have been the first time for young James: he cut a rug with a dead-on “Gangnam Style” dance at the Waste Management Phoenix Open just a week prior. Coming into Pebble, Hahn was a well-oiled machine, warmed up and ready to start a dance (dance) revolution.

But what kind of distracting moves would Hahn have performed to steal a victory from Snedeker? The Californian would have had his choice of legendary golf dances:

Iconically performed by Rich Beem after winning the 2002 PGA Championship, this little jig is all enthusiasm and no skill—an admission that you left all your talent on the course. As Hahn has ample dancing talent (and doesn’t wear pleated khakis), this move wouldn’t have been quite right.

Like journeyman Ken Duke at last year’s Pebble Beach Pro-Am, Hahn might have stirred things up with a rendition of the “Cabbage Patch” in the middle of the 16th fairway. Unfortunately, though, his dance would’ve been met with scowls and boos from the crowd.

When you’re feeling the flow, there’s nothing better than to psyche out your opponent with this blend of galloping and self-spanking. Once you see this magnificent spectacle, your competitive will is truly lost. Just ask Gary Potter (Kevin Nealon) from Happy Gilmore.

We know James Hahn likes the trendy dances, and so he could’ve abruptly launched into the hot move of the moment: the Harlem Shake. Best of all, he would’ve caught Snedeker by surprise with his quick transition from normal to buckwild. Allow the Villanova men’s golf team to demonstrate.

This dance technique shows everyone who’s boss. Popularized by Al Czervik in “Caddyshack,” this involves cutting in and dancing with the companion of your enemy, preferably while insulting them. (“You’re a lot of woman… want to make $14 the hard way?”) Hahn could have taken Snedeker’s caddie aside and really made him fume with jealousy.

No matter how he chose to bust a move, James Hahn would’ve put himself in the spotlight again and maybe even have won the tournament.

So what? So let’s dance!