Davis Love III Not Done Yet, Thanks To Peyton Manning 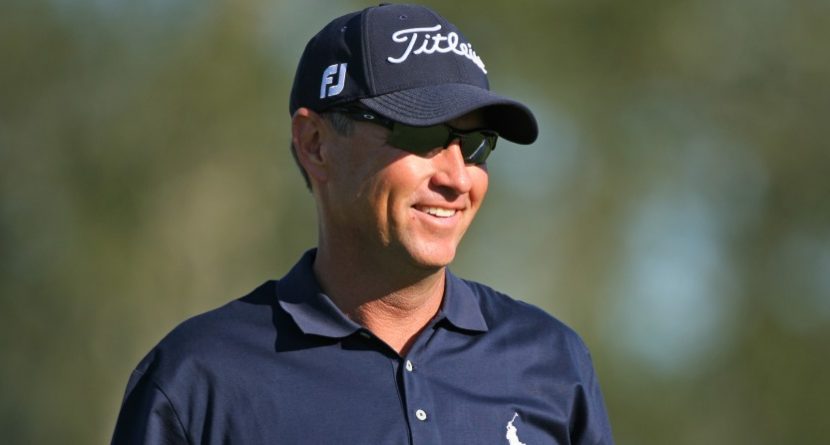 Davis Love III turned 50 years old last April, has spent nearly 30 years competing as a professional golfer, and counts the 1997 PGA Championship among his 36 career victories as a pro. Like many other older golfers, he has a golf course design company, a restaurant, and has written a book. It all adds up to quite a career.

Only Love isn’t quite ready to call it a career.

After neck surgery in February 2013, Love now has plans of returning to all four majors, earning a spot in the Players Championship, and contending on both the PGA and Champions Tours. He’s not yet ready to just wind down on the senior tour, because if Peyton Manning can get better after neck surgery, why can’t Love?

“They said two to two-and-a-half years of improvement, so I’m still six or eight months from hopefully my peak,” Love told PGATour.com. “Peyton Manning had the same surgery and it took him about two years to get back to 100 percent, and now he’s back to maybe 150 percent. He’s playing the best football of his life. It’s encouraging that I can come back from it. My ball striking has gotten better and better it seems like over the next year, so hopefully that will continue to improve.”

You could say Manning has been good. He set NFL records last season in touchdowns (55) and passing yards (5,477); earlier this month he moved to the top of the all-time passing touchdown list (513 and counting); and since joining the Denver Broncos after four neck surgeries, the team has gone 34-9.

Golf is obviously a little bit different than the team sport of football. But just for comparison’s sake, if Love wanted to make like Manning and enjoy his best athletic years post-surgery, he’d need to top his 2003 campaign: four PGA Tour wins, 16 top-25 finishes, more than $6 million earned.

More realistically, Love just wants to get back into the majors.

“I’m going to do a lot what I see Vijay Singh doing, cherry-picking the good ones on both tours and enjoying the benefits of being a lifetime member on both tours. But I think for this year, I’m going to really focus on, and maybe even the following season, focus on trying to get some FedExCup points, try to get in the Players. I’d like to play the Players or all the majors one or two more times, so I’m going to have to focus on our tour to get into those tournaments,” he said.

But seeing as how Love hasn’t qualified for the FedExCup playoffs since 2012, he’ll have to rely on sponsor’s exemptions, which is how he got into this week’s CIMB Classic in Kuala Lumpur, Malaysia, his first time playing in the country. Then he’ll just have to play well enough to earn points and money to get back into the bigger tournaments.

“I really want to focus on my golf game for a couple years,” he said. “I’ve got a great opportunity. I’m eligible for both tours, the regular tour and the Champions Tour, so I’m going to take advantage of that while I’m still fresh and ready to play.”