DeChambeau Not Eligible For 2016 Ryder Cup 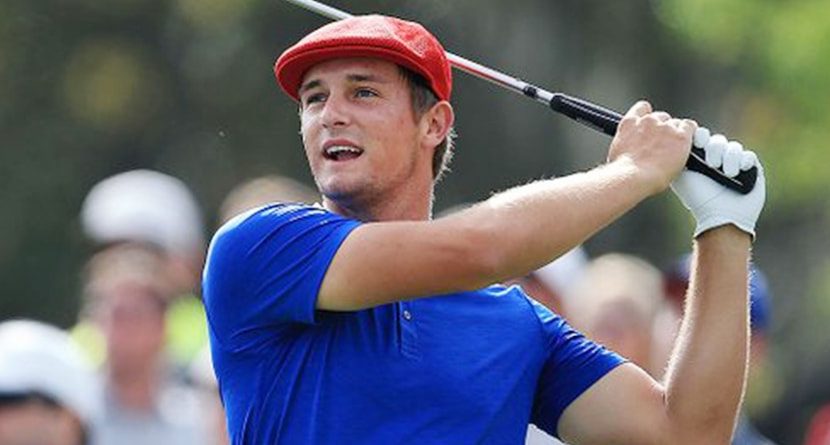 Bryson DeChambeau is a different cat. His scientific approach to the game, coupled with a few personality quirks has made him one of golf’s newest and most interesting figures. And that’s not even mentioning the mountains of game he possesses.

The winner of the NCAA Individual title, the United States Amateur and as one of the few bright spots on the U.S. Walker Cup team, DeChambeau has proven that he is a capable team and match player. Wouldn’t a young gun like him, should he continue to ride the wave of success he’s currently surfing, be a nice fit for the new-blood United States Ryder Cup team in 2016?

Of course, if he were eligible.

According to RyderCup.com, however, DeChambeau does not yet hold the required designation to even earn points towards making the team.

In order to collect Ryder Cup points, PGA of America Senior Director of Membership Services Tom Brawley explained to us that, “a player must have an A-3 PGA of America Member Classification.”

While DeChambeau is a professional now, he’s playing on sponsor exemptions and does not have official status on the PGA Tour, which means he is ineligible for PGA A-3 status at this time.

It is possible, however, that DeChambeau could earn status on Tour depending on how he finishes events prior to the PGA Championship that would make him an A-3 member.

This isn’t a new phenomenon, although it is a rare one. Jordan Spieth was under the same kind of pressure just three years ago when he was taking the sponsor exemption route to the PGA Tour, as opposed to a more conventional path.

DeChambeau would currently rank 74th in the most recent Ryder Cup rankings thanks to his fourth-place finish at the RBC Heritage. But without status, that money is in Ryder Cup purgatory. With six more sponsor exemptions at his disposal — as well as a start this week at the Valero Texas Open thanks to his top-10 finish at Harbour Town — DeChambeau has ample opportunities to gain status.

If he were to gain status and therefore an A-3 classification, the points that he accrued during his qualification process would be retroactively awarded to him.