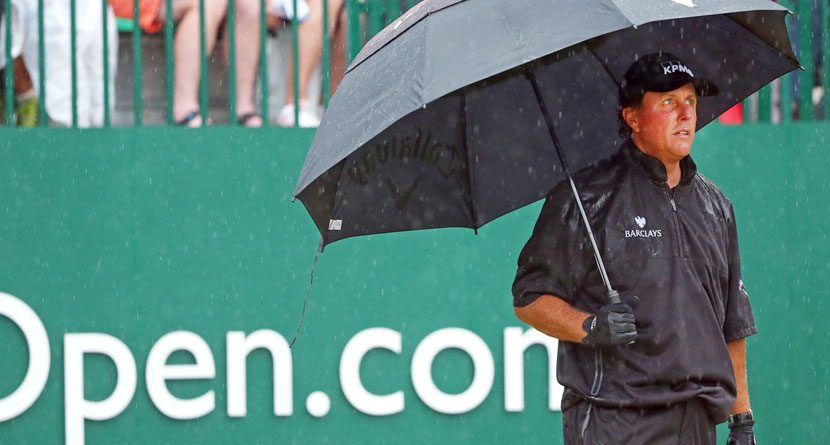 HOYLAKE, England — When he won the Open Championship last year, Phil Mickelson did so with a burst of birdies on the back 9 that came from nowhere.

Nobody ever expected him to win this tournament. Even he was staggered to do it, and he has since described it as his greatest achievement in golf. It was a victory that moved him to tears; since then, it has been his game that has moved him to tears.

The most popular Open champion of recent times has suffered horribly with all parts of his game this season, but most especially on the greens. He made the cut this week at Royal Liverpool easily enough but knows that he could have been in contention had he putted as we all know he can.

The left-hander endured another roller-coaster round Saturday. Starting the day on level par, he knew that he needed to go low if he was to have the remotest chance of successfully defending his title.

Sadly, it was more of the same. He birdied the first, but dropped three shots on the front nine to reach the turn in 37, 2 over par. Mickelson being Mickelson, birdies followed at the 10th, 12th and 13th. If nothing else, the 44-year-old gave his fans value for money, but this wasn’t how he wanted to perform.

A 71 sees him start the final round on 1 under par. He will be finished and gone from here before the winner reaches the turn.

He missed the cut at the Masters, played miserably at the U.S. Open and is still looking for his first top-10 finish of the season in the United States.

Mickelson, once a shoo-in for any American Ryder Cup team, has fallen to 13th in the world rankings, is 97th in the FedExCup standings and is way outside the automatic places for the match against Europe in September. Tom Watson, the U.S. captain, already faces having to hand one of his wild cards picks to Tiger Woods — if he decides that Woods is worth one.

What will he do about Mickelson? On current form, neither of these giants of world and American golf is worth a pick. And it has to be said that Paul McGinley, the European captain, will be rubbing his hands together should Watson decide to select them both.