Despite Ranking, No One Better Than Martin Kaymer Right Now 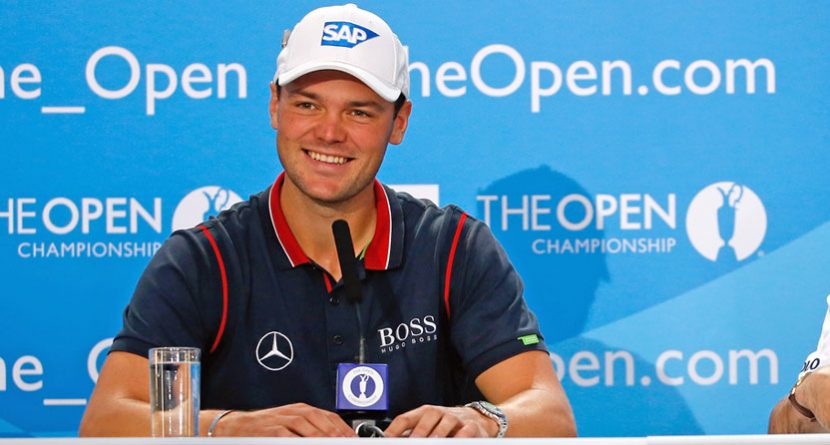 He won the PGA Championship and topped the world rankings. Martin Kaymer had it all, but then he made the inexplicable decision to rebuild his swing.

As suddenly as he had risen to the peak of his profession, he lost his game. Completely.

Now, remarkably, he has found it again, abandoning the changes he made and reverting to the technique that had served him so well.

Related Link: 9 Things You Need to Know about Martin Kaymer

So why did he tinker with a well-oiled machine in the first place? He had taken a long, hard look at Augusta National, home of the Masters, and concluded that the gifts God gave him were not sufficient to win that tournament. To succeed at Augusta, you need to move the ball from right to left, and Kaymer couldn’t do that — and still can’t.

As it turns out, going back to his original swing has landed him the U.S. Open and the Players Championship, two of the biggest prizes in golf. And now he heads to Hoylake as one of the favorites to win the Open Championship.

Make no mistake, winning the U.S. Open at Pinehurst by eight shots was one of the greatest performances the world of golf will ever see, right up there with Tiger Woods’ wins at Pebble Beach and St. Andrews.

There were many things that contributed to his victory, but fellow pro Thomas Levet believes a penalty drop in the third round was key.

“That drop was absolutely brilliant,” Levet said. “In a situation like that, many players would have lost the plot and probably tried to play that ball and who knows what could have happened?”

Playing the par-4 fourth hole, Kaymer took an unplayable after his tee shot went way left before ending up next to a pile of pine needles. He then punched a low third shot down the fairway, well short of the green, struck his fourth to 15 feet, and sank the bogey putt. Cool and calm as you like.

“Martin took that unplayable lie almost with a laugh and just dropped his ball on the side. And he not only dropped it on the side but managed to make an up-and-down from 160 yards as well,” Levet said. “He made that hole look like nothing happened almost and it’s a really tough hole. It was only a bogey for him and, in the end, it’s on shots like this that he wins. He is very, very good under pressure, and I like his chances at Hoylake.”

Kaymer clinched his second major with closing rounds of 72 and 69 at Pinehurst, where the firm and fast-running course, in many ways, resembled an Open-style links.

If the German has a particular strength it is his course management, which he demonstrated time and again at Pinehurst. He knew that going for flags could result in some big numbers so he ignored the pins and focused on hitting the center of the greens, avoiding Pinehurst’s card-destroying run-off areas.

Levet, who watched Kaymer’s U.S. Open win while working as a golf analyst for French television, first heard about the German well before he joined the European Tour.

“I was speaking with Alain de Soultrait, the director for the European Challenge Tour, and he was telling me about this German who was playing crazy golf at that time,” Levet said. “And I said, ‘OK, we will see what he does on the European Tour.’ And then Martin comes in for his first year, his second year, he wins very quickly and gets through the rankings like crazy and goes to No. 1 in the world.

“People knew about him long before he arrived on the European Tour. He wants to be better, he wants to improve. He’s a perfectionist.”

Kaymer finished fourth in the 2006 Challenge Tour rankings after playing just eight events and winning two of them, the first on his professional debut. He has since claimed 11 titles on the European Tour, including his first major crown at the 2010 PGA Championship. Throughout it all he has remained gracious, level-headed and courteous to everyone he meets.

Related Link: That One Time Martin Kaymer Skipped Ball Off Pond Into Hole

“What people don’t realize is how normal Martin Kaymer is,” Levet said. “He is a very easy-going person and a very nice guy. But he loves playing golf and he is doing that maybe the best of anyone at the moment.”

One example of Kaymer’s character that stood out for Levet was when the German, who was struggling for form in 2012, drained a six-foot putt at Medinah with the outcome of the Ryder Cup match depending upon it.

“A career could have ended there, he could have been destroyed by that putt if he had missed it,” Levet said. “But his career has been reinvigorated from there. He showed big nerves at Medinah and that helps build your nerves for tournaments like the U.S. Open and The Open. He hasn’t got too many weaknesses and he has a lot of strong points so that makes him a very dangerous player in any situation.”

One curiosity, however, involves his world ranking. Even the players don’t really understand how it works, but they would all tell you that a golfer who wins the Players Championship and U.S. Open in the same season is obviously one of the best in the world and should clearly be in the top four or five in the rankings. Instead, Kaymer finds himself 12th, behind the likes of Jason Day, Sergio Garcia, Jordan Spieth … and Jim Furyk!

This year has thrown up some anomalies. Adam Scott would have risen to No. 1 in the world without competing in the Players Championship. When Scott competed, it needed the brain of Einstein to work out what he, Henrik Stenson and Bubba Watson had to do to topple Tiger Woods from the top spot.

Yet, most people will ignore the rankings and make up their own mind that Kaymer is the best in the business right now.