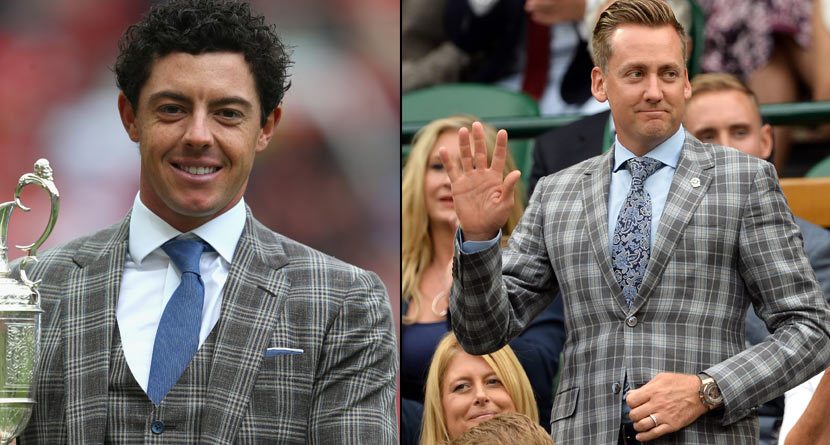 McIlroy was busy last Saturday parading his claret jug around Manchester United territory, walking out onto the pitch at Old Trafford and showing off his shiny trophy to the fans.

Soccer nut Ian Poulter was watching at home (I assume) and must’ve spit out his tea when he saw McIlroy’s outfit. I say this because the colorful Englishman took to Twitter call out the young Irishman, looking for a return of his suit:

Hey you can keep your Claret Jug but can I have my suit back please Mr @McIlroyRory I thought something was missing. pic.twitter.com/wI12lw7qdV

Sorry @IanJamesPoulter you must be mistaken… this suit was only available with the claret jug!

And the red socks? @McIlroyRory Sorry @IanJamesPoulter you must be mistaken.. this suit was only available with the claret jug!

Poulter then turned from McIlroy’s suit and sock choice to taking a little jab at the play of Rors’ favorite team. As we all know, Poulter’s loyalty lies with Arsenal, not Manchester United:

Yes them red socks. I thought Van Gaal was going to ask you to take off that suit and help your boys out. They needed it. @McIlroyRory

You do realize they are the only trophies that will be paraded at Old Trafford this season. @McIlroyRory